Go into all the world 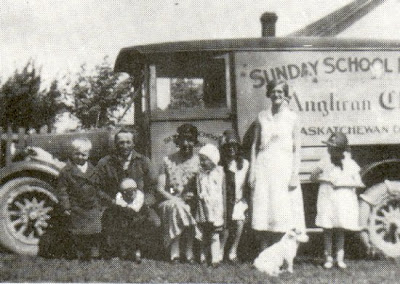 Much has been written in many, many places about the current state of the Church.

The Church, they say, is declining. In crisis. In 60 years, there won't be any Anglicans left.

And the same, they say, is true for all denominations - statistically, they are all declining. (Roman Catholic numbers are up slightly in North America, but only with the aid of immigration.) The fastest growing religious identity, according to census and survey data in both Canada and the United States is "none" - or occasionally "spiritual but not religious.

The 60 year statistic, while useful for getting attention, is a statistical absurdity. Past trends are not a reliable predictor of future trends. The same phony analysis in 1950 would have predicted a profoundly religious society 60 years on, but somehow the trends changed direction.

The current trends, however, are worrisome - and rightly so. Our current mission strategy (keep the doors open as long as you can) isn't working anymore. (Actually, I'm not convinced it ever did, but that's another post.)

So, what do we do about it?

Well, some people will doubtless decide to keep on doing what they're doing the way they've always done it. In most cases, I suspect, this will mean providing a chaplaincy service for existing members and not much else.

Others, doubtless, will surrender to despair. Proverbs assures us that where there is no vision, the people perish. The same applies to faith communities.

The place where I hang my biretta was there not so long ago. At the annual meeting three years ago, there was a discussion about choosing between closing the doors now or struggling on for a while and closing the doors later. Fortunately, they wanted to be persuadewd that there were other options.

The question is, if your Church wants to thrive, what does it need to do?

It's always seemed to me that the most important step in figuring out where you want to go and how you want to get there is determining where you are now. At our parish, we are going to use some tools from Natural Church Development to measure the current state of the parish and to show us what we need to work on. We've already taken several steps (a new sign, a new website, unaddressed admail, an upcoming parish fair for the whole community). Over the past few years, we've seen some growth in those indicators that are easy to measure (cash in plates and bums in pews). And visitors keep telling me it seems a joyful place.

When I was looking into what tools we might use to assess the health of our parish and to find our way forward, I asked several churchy people I knew what they thought of NCD. Not everyone was a huge fan - though most of the folk who had used it liked it. But the most salient comment came from Dean Kevin Martin of Dallas who said:

". . . whether it is Natural Church Growth or the Purpose Driven Church, any intentional and organized effort of congregational leaders to understand their congregation's strengths, reach out to new people and do this in a planned way usually will bring benefits."

In other words, the most important thing about the first step is that you take a first step.

Fr. Tony Clavier touches on much the same point in his blog today. After referencing the current language of crisis and decline, Tony notes that this is not the first time we've seen this trend. In the United States in the late 18th century, religion was in decline, fewer than 10% of the population were "churched" and the Episcopal Church, still identified with the former colonial power in the minds of many, was in particularly dire straits. Then along came first the Evangelical Revival and then the Catholic Revival.


In our present predicament a study of the great domestic missionaries of the 19th Century would enlighten and perhaps enthuse. When I feel discouraged I reach for the biography of Bishop William Hobart Hare, first Bishop to the Dakota people and then of the church in the State of South Dakota. Following him in his buggy, taking refuge in homes and boarding houses during blizzards, fighting fleas and mosquitoes in the summer, or in his latter years suffering from a frightful cancer of the face, battling for the sanctity of matrimony in Sioux Falls which had become a place where instant divorces and re-marriages could be obtained, I am humbled and inspired.

The late Eighteenth Century was not unlike our own day. The Age of Reason brought with it doubts and agnosticism about the central teachings of the Church. The rest of the population as many uprooted themselves and moved to new territories, mingling with waves of immigrants saw little relevance in the stuffy social conformity of Anglicanism. And then God acted in the lives of men and women who differed in their approaches to the Gospel and the nature of the Church, but who fell in love with Jesus and injected that love into the forms and structures of the Episcopal Church.

God is calling for a similar devotion now.

The Canadian Church has its own similar stories. I've included a picture of one of the Sunday School Vans that used to drive around rural western Canada - often the only Church people saw for weeks or months at a time.

The important thing is that these faithful heroes - saints in the best sense of the word - was that they took action. They carried the faith into the world.

Jesus tells us to "go into all the world and proclaim the good news."

I still think and preach that the first thing we need to do is open our doors and get out into our local communities. I use the coffee shop across the back alley from our church as a field office. If I am not doing my parish visits and I am not in the church office (this latter is a space I tend to avoid if I can) I can be found in my field office drinking coffee and talking to the locals. Some of the conversations I have had there are amazing. It keeps me in touch with the community and its needs. Hopefully in time I will find a way to mesh our resources with those needs.

The other thing we need to remember and keep reminding our people is that it takes time. You don't just do something once and then evaluate it as a failure or ineffective based on low turnout or results. You can re-evaluate for what went well and what did not and then tweak the next attempt accordingly. But at its core it should be about building trust and relationship with your community and that takes time and effort. So many of us want the quick easy fixes.

Remember that Jesus said to go out and expel demons, resurrect the dead. A little sleight of hand and some fireworks should help. You've got to have showmanship to keep the believers and others interested.

I would add, pick something that seems to fit, and commit to doing it whole heartedly. Don't jump around from program to program - it takes time to see results.

Here's a place that I understand has had good success with NCD www.sttimothy.ca

You have as much chance of bringing mainline protestantism back as buggy whips and the Orange Order.

Either way, you should take offense that I raise one of those possibilities.