A constitution in tatters 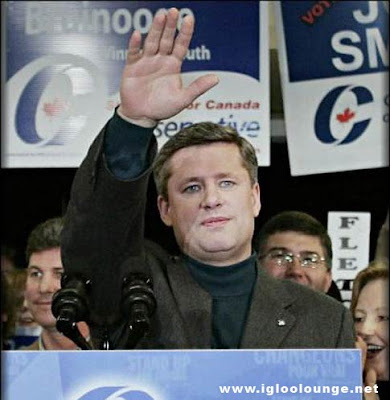 Any monarchist will tell you that HM the Queen is the final guarantor of our constitutional liberties in this, the geographically largest monarchy in the world. As HM continues her visit to Canada today, one is moved to think that, all by herself, she might probably have done a better job of security in Toronto last weekend.

Picture the steely old grandmother, with her hideous hat and oversized handbag, telling the "anarchists" to put down the rocks and behave themselves. Since a goodly number appear to have been police officers putting on a show, they'd have been bound to listen to her.

What is absolutely certain is that the Integrated Security Unit that was supposedly ensuring security in Toronto was simply not up to the task. They allowed violence to go unchecked over 24 blocks and 90 minutes, and then went about arresting peaceful protestors, journalists and startled passers by, seemingly at random. They arrested more than 900 people in a 24 hour period - more than twice the number rounded up in 1970 when the Left's favourite fascist, Pierre Trudeau, suspended our constitution because two guys had been kidnapped. (Note, at the point Trudeau declared martial law, Pierre Laporte was dead, but his body had not yet been discovered.) And Harper's constitutional crackdown was accomplished without ever declaring martial law.

The most charitable interpretation is that every single person in authority within the ISU was completely incompetent. That could explain why they left violent window-smashers alone while rounding up people who had followed instructions and returned to the designated free speech area.

Incompetence is the most charitable interpretation - but not the most credible.

No, there appears to be something far more malign and more disturbing going on.

* We have the iron-clad fact of the 90 minute free pass given to supposed violent protestors to smash windows and intimidate passers-by.

* We have the firetruck that was held back from putting out the fire.

We are asked to believe that 10,000 armed and armoured police could do nothing to impede fewer than 200 thugs? Just how stupid do Stephen Harper and Bill Blair think we are?

At best, a small number of protestors were allowed to engage in violence unmolested in order to justify a massive attack on civil liberties to follow. At worst (and, given the admitted use of agents provocateurs by police at Montebello in 2007, most likely) some significant number of the "anarchists" smashing windows were actually police officers perpetrating a massive fraud.

* Then we have police surrounding groups of non-violent protestors, ordering them to leave but giving them no way out - then arresting them for not doing the impossible.

* We have numerous allegations of female detainees strip searched by unsupervised male officers - complete with at least one allegation of a finger being inserted into the traumatized young woman's vagina. (Believe me, if it were MY daughter, I'd be making sure that Bill Blair and his thugs got to see what a real violent protest looked like.)

How bad was the police over-reach?

You can read what the Canadian Civil Liberties Association is here.

But if you really want to appreciate how badly the ISU screwed up, consider this. They screwed it up so badly that even the mainstream corporate media noticed and are covering the story. Canada's newspaper of record, the Globe and Mail, Canada's largest private broadcaster CTV (see in particular the video Journalists on the Arrests), the Ottawa Citizen, Canada's largest circulation newspaper the Toronto Star, TVO anchor Steve Paiken, Canadian Business for God's sake. These are not a gang of radicals and leftists. These are the elite of Canada's corporate media establishment.

When the abuse of state power is so egregious that even the corporate media are telling the story, you know it's bad.

The fact of the matter is that if even one tenth of these allegations are confirmed, heads need to roll. And if heads are to roll, they can start with Toronto police chief Bill Blair, who has already been caught out lying to the media more than once.

Oh, and lest anyone want to place all the political blame on the federal Conservatives, let us not forget that the McGuinty Liberals secretly passed regulations to give police extraordinary powers. Liberal commentators will pretend otherwise, but the Liberal Party of Canada has been at the heart of every attack on the constitutional rights of Canadian citizens, from the internment of Japanese-Canadians to Trudeau's martial law to the events of last weekend in Toronto.

Most police officers I've ever met want to make society safer. I rather suspect that even many of the officers arresting innocent people had been told (ie, lied to) by their superiors and believed that they were arresting dangerous radicals. Large crowds and tense situations can lead to a mob mentality. In this case, it is pretty clear that the mob on Saturday was not the protestors, but rather the police.

Senior police ad security officials have violated the oaths they have taken and disgraced the uniforms they wear. They have led their subordinates, knowingly or unknowingly, to act shamefully.

I am moved to consider September 11. No, not September 11, 2001, when the World Trade Centre fell, but September 11 1973, when corporate power overthrew the constitution of Chile.

The difference here is that the governments - federal and provincial - were the ones shredding the constitution.
Posted by Malcolm+ at 6:32 PM