I Can't Laugh at Rob Ford

One of the biggest ongoing political stories in Canada (and, unfortunately, much of the world) is the saga of Toronto Mayor Rob Ford careening out of control. 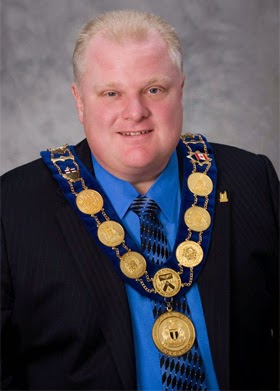 The political myth of Rob Ford did not begin to unravel until rumours began to circulate of a video showing the Mayor smoking crack cocaine with known criminals, several of whom have, by now, met violent deaths. The unraveling continued and continues to this day, often exacerbated by the bizarre behaviour of the Mayor and the equally bizarre enabling behaviour of his brother, Councillor Doug Ford. A complete timeline of self-destruction of Rob Ford - or at least the public portion of it - is here.

As regular readers of my blog or my Twitter feed will know, I can be a fierce partisan. While there are officially no parties in Toronto municipal politics, it is clear that Ford and I are not of the same party affiliation.

Even so, very early in the saga I lost any interested in joining in the Ford pile on.

As I watched, the narrative swiftly veered from political downfall to personal tragedy.

Rob Ford is clearly a troubled man. There are several pieces to the puzzle, no doubt, but it is clear that Ford's relationship with both recreational drugs and with alcohol has become a destructive and high risk matter. The enabling behaviour of his brother and his other close associates only adds to the risk.

For me, this is no longer the morality play of a bullying buffoon getting his just deserts. It has become the public spectacle of a troubled man staggering down the road of personal destruction. I despise virtually everything that Rob Ford stands for, but I can take no joy in his embarrassing fall from grace.

The Mayor of Canada's largest city is committing slow suicide - and I mean that literally, not metaphorically - under the glare of the camera lights.

It ceased to be funny months ago.
Posted by Malcolm+ at 12:49 AM