"And had become a Jesuit ... but for the Revolution"

Since his election, Pope Francis has made significant process in changing the way most people view the Roman Catholic Church. While he has shied away from any meaningful alteration of doctrine (indeed, he has closed the door on any discussion of women's ordination), Francis has openly called for a different emphasis. This has made him something of a poster boy for those who which the Roman Catholic Church were something other than it is. And it has frequently led such folk to believe that Francis has changed much more than he actually has. 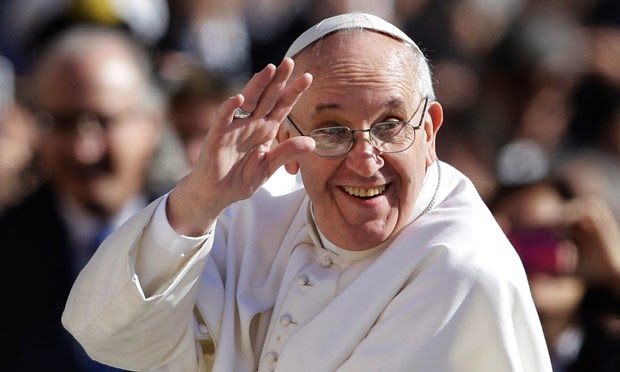 But more significantly, and garnering less attention, Francis has embarked on a restructuring of the Vatican bureaucracy, the Curia. Powerful arch-conservatives like the American Raymond Burke have been shifted out of positions that allowed them to influence who did or did not advance in the hierarchy. His former Argentine nickname, Mona Lisa, has been translated into the proper Italian title of da Vinci's painting, La Gioconda, referring to the enigmatic smile that makes briefers think they've convinced him while all the while he keeps his own counsel. These hierarchical shufflings have garnered some coverage, inclusing this, this and this.

Much of the analysis suggests that Francis's priority will be to decentralize power, significantly reducing the capacity of the Curia - and especially Curial careerists - to run the Church without much concern for the pastoral implications of hardline decisions.

As an Anglican, I find it more than a little ironic that, as Rome begins to inch away from authoritarian centralization, so many Anglicans seem to want to move towards it. Both GAFCON and the Anglican Covenant are attempts to radically restructure the Anglican Communion in the direction of greater centralization.

We are not A world-wide Church, nor have we ever been.  We are a family of Churches bound by aspects of shared history and by mutual affection. Just as "The Bishop of Rome hath no jurisdiction in thei Realm of England," so also the Bishop of Abuja hath no authority in Canada, nor the Bishop of Gasabo authority in the the United States. The mischief of the GAFCON folk will either fizzle or split the Communion, but ultimately any attempt to force all Anglicans (particularly those in Europe and North America) to submit to the authoritarian impulses of an Akinola or an Orombi is doomed to failure no matter the amount of post-colonial guilt.

But neither will the former Archbishop of Canterbury's more subtle attempt at centralization and curialization. Despite the organizational advantage of controlling all information coming out of Lambeth Palace, Church House and the Anglican Communion Office, Archbishop Williams could not get the Church of England to support his proposed Anglican Covenant. I am very proud to have been part of the Band of Bloggers that threw a spanner into those works.

Like many an Anglo-Catholic, I've always said we can learn from Rome. At the moment, I think we might learn that centralized authority isn't always what it's cracked up to be. I don't know that we need an Anglican Francis. We were never (deo gratias) as centralized as Rome. But we certainly do not need to rush headlong into the very sort of centralization Rome has come to find wanting.

The title of the post comes from the satirical song The Vicar of Bray, the tale of a Church of England cleric who works assiduously to support the current ecclesiastical standard during the period from the reign of Charles II to the reign of George I. During the time of James II (and VII), he supports the king's opposition to the penal laws which oppressed Roman Catholics and dissenting Protestants and he reads the king's Declaration of Indulgence, which, contrary to propaganda, would have extended religious liberty. Because James II was a Roman Catholic and "popery grew in fashion," the Vicar of Bray suggests he'd have become a Jesuit if not for the so-called Glorious Revolution of 1688 which overthrew the king. The line was chosen, obviously in reference to the fact that Francis is a Jesuit, not to any suggestion that I might "swim the Tiber." Though if I did, I've always had a soft spot for the Jesuits. I went to a Jesuit college in my undergraduate degree after all.
Posted by Malcolm+ at 12:57 AM

'We are a family of Churches'

It seems to me that true word 'church' in the NT means either (a) the local congregation or (b) the universal body of Christ. To speak of national churches, or a family of national churches, is to make an idol out of nationalism, and it's significant that Henry only did it to get away with a divorce that the Pope didn't want to grant him.

I think our Pentecostal friends in Canada have this one right. They translate ekklesia as 'assembly', and their largest denomination is called 'The Pentecostal Assemblies (pl.) of Canada'. It would be more fitful to the NT for us to call ourselves 'The Anglican Churches in Canada'.

Our Anglican provincial structure, while generally based on political boundaries, is not necessarily so. The Episcopal Church and several other provinces cover multiple civil states. I can't think of an example of a province based on a sub national basis, except arguably the four Anglican provinces in the United Kingdom.

Whether the level of province is an appropriate locus of authority is obviously an arguable point, but it is where Anglicanism has historically set it. At least until the past generation, starting with Graham Leonard's interference in (I think it was) Colorado.

Malcolm, I don't disagree that a national structure can be useful. I just don't think there's any theological justification for calling it a 'Church'. And I think that assuming that the way Anglicanism has evolved historically is just a given and can't be challenged would be unfaithful to our history. Surely the reason we're not Roman Catholics is that our forebears examined the RC way of being church in the light of primitive Christianity and found it wanting.

I'd agree that "it evolved that way" is not, in and of itself, proof that "it should be ever thus." That said, I'm a trifle institutionally conservative, and thus see the onus of proof as being with those who would propose structural reforms.

The Anglican Covenant proposed a radical reconsideration of Anglican polity without ever actually admitting what a radical restructuring it was. Indeed, its defenders rather disingenuously pretended that the Covenant's critics were actually the ones proposing a change, which was utterly false.

As to whether the provincial structures constitute Churches in a theological sense, I'd return to my previous observation that as structures evolve, language evolves with them.