At the parish where I currently hang my biretta, we use what might be called Missa Hodge-Podge. We sing a hymn in the place of what should be the Gloria, Kyrie or Trisagion. The Sanctus is Schubert's Deutsche Messe. The Pater Noter is Rimsky-Korsakov. I'd like to return the Gloria / Kyrie / Trisagion to its proper place, but that means finding an appropriate setting for a congregation of relatively small size with a relatively limited number of really strong singers. 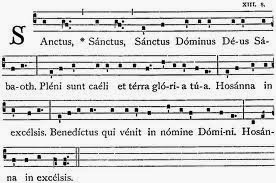 What I'd really like to do on this front, if I had my druthers, would be to introduce a new mass setting where all of the pieces were of a piece. Unfortunately, Common Praise (the official hymn book) isn't that much help. Apart from the Merbecke setting for the traditional language rite, there doesn't seem to be a complete setting for all of the pieces. Most are missing the Lord's Prayer. The Schubert setting has a Kyrie but, oddly, no Gloria, even though I'm pretty sure it exists and that I've even heard and sung it.

There are several settings floating about elsewhere, but I'm not sufficiently familiar with them to make an assessment of how singable they are for a congregation like ours. The late Howard Buchner, Dean of Divinity through most of my time at Trinity, wrote an eminently singable Mass (which we affectionately referred to as Missa Bucho), but it has now gone out of print and seems to have become effectively unavailable.

My requirements are simple. It should be singable by a small congregation of mostly middling singers.

You could commission a setting. My rates are very reasonable... ;) and I'm a Canadian composer, too! (even though I live in the UK)

You could commission a setting! My rates are very affordable ;) and you'd be supporting the work of a Canadian composer, too, even if I do now live in the UK...

Oh -- and I generally release my work under a Creative Commons Share-Alike license, so (subject to copyright on the words), I would put the setting online and anyone would be free to use it. No "out of print" problems.

Personally I prefer not to sing the Lord's Prayer. Not everyone can sing, and I think if we want to be an inclusive church, that prayer at the very least should be a prayer that every single person in the congregation can fully participate in.