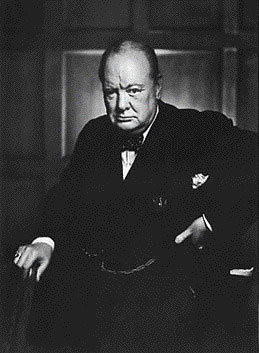 Aren't you glad i didn't use a different Churchill quote, like this:
Lady Astor: Winston, you're drunk!
Churchill: Madam, you're ugly - and tomorrow I shall be sober.
Posted by Malcolm+ at 11:21 PM 2 comments:

Tim Chesterton at Tale Spin has posted a most worthwhile survey on his blog. He's asking "non-churchgoing readers" about why they don't go to church.

Now there is a radical concept. Let's not assume what they think and feel and need and want. Let's ask them.

That's what sensible organizations do.

1. I hope Tim is distributing this survey by other means besides his blog.

2. Why do I always feel I want to call Tim "Father Tim" even though I know he's "not that sort" of Anglican?
Posted by Malcolm+ at 11:52 PM No comments:

"When I was sick, you ministered to me"

Sensible conservative Andrew Sullivan has been liveblogging today about events in Tehran.

In this post, he copies unconfirmed tweets, including this very disturbing one:

I emphasize, this is NOT confirmed.

That said, it is a very disturbing report.

We are advised, in Matthew, that we will be judged on how we have responded to those in need - the hungry, the thirsty, the sick and the suffering.

I fail to see who could be in greater need than those who are being done to death by their own government.

Our Minister of Foreign Affairs in the Honourable Lawrence Cannon - email him (CannoL@parl.gc.ca). Lawrence Cannon is the grandson of Chubby Power - the last Canadian Liberal prepared to stick to his principles. (He resigned from Mackenzie King's cabinet over conscription.) One hopes his grandson might be prepared to listen to a principled argument.

While you are at it, email:

And don't forget to include your own Member of Parliament.

Look with pity, O heavenly Father, upon those who live with injustice, terror, disease, and death as their constant companions. Have mercy upon us and help us to eliminate cruelty wherever it is found. Strengthen those who seek freedom, justice and equality for all. Amen.

The convention was today.

In one sense, the convention itself was of possibly limited relevance. Of the nearly 9500 votes cast, most had been advance votes by mail, by phone or online. There were apparently only 700ish votes cast live today.

Our principle opponent's people had been confidently predicting a first ballot victory in the order of 55 - 60%, which would be the most decisive victory in our party's history (apart, arguably, from the 1987 convention where Roy Romanow was acclaimed).

So much for those predictions.

Ryan finished a quite respectable 25% on the first ballot, but Dwain Lingenfelter (Link) fell short of a majority at only 46%. See the complete results here. The fourth place candidate was dropped and the third place candidate withdrew. Both subsequently endorsed Ryan.

Problem was, we basically needed to take 90% of their votes on the second ballot to stage an upset - a pretty tall order.

It was not to be. Link beat Ryan, clearly but not massively, 55 - 45% on the second and final ballot.

Three months ago, people used to describe the race as "former Deputy Premier Dwain Lingenfelter, MLA Deb Higgins, former party president Yens Pedersen and that doctor from Saskatoon none of us had heard of."

I am exhilarated that I was part of a team that took a virtual unknown and turned him into a serious contender. But, of course, I'm disappointed we couldn't get across the finish line.

Ryan's concession speech hit just the right note, calling on those disappointed in the result to stay and to help build the party. None of this self-indulgent PUMA stupidity here.

I had been up editing speeches until 3:00 am. I'm exhausted. But I know I've been part of something worthwhile.

(I'll be away at the Canadian Public Relations Society Conference and the Change of Command of HMCS REGINA over the coming week. Don't expect me to resume blogging until sometime after June 14. Then I promise to get back to covering the Anglican skirmishes from my own curmudgeonly perspective.)
Posted by Malcolm+ at 8:47 PM 1 comment: