The score was a decisive 45-23 over the Hamilton Tiger-Cats.  Oskee Wa What? 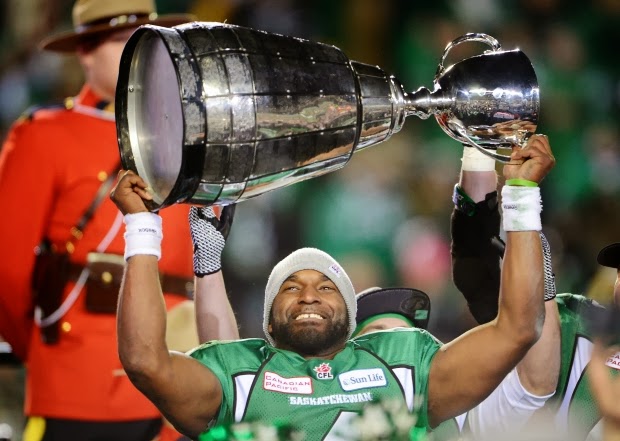 Today I attended my first Remembrance Day ceremony since retiring from the Royal Canadian Navy. With Remembrance Day on a Sunday last year, I had other duties to attend to, and the last time I had been at the Cenotaph for the ceremony I had actually been presiding.

It was much as it has always been; several hundred people, some in uniform, some veterans, several groups of children, young families, many of those too young to have been in World War II or Korea but realistically too old to have been in Afghanistan.  There seemed to be fewer than at the height of the Afghanistan War, but that may just have been the weather. It could have been far colder, but it was cold. Though not as cold as Taylor Field last night and 30,000 plus had turned up there for a football game.

Unlike the more elaborate service at the Brandt Centre, the Cenotaph service is concise and to the point. But also, unlike the Brandt Centre service, the Cenotaph allows for the laying of wreaths from most any group or individual that wants to present one. It seemed to me that this year there were fewer wreaths from families in memory of specific war dead. As has been the case with Cenotaph services for as long as I can remember, a wreath was laid "in memory of seven brothers," though I don't recall that we have ever heard the name of that tragic family.

I did something today that I had never done before for Remembrance Day. I wore two poppies: one red and one white. 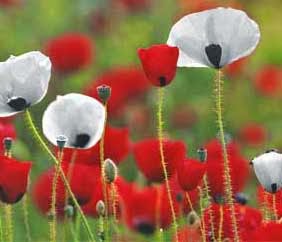 There has been controversy in Canada over the past week about white poppies. The red poppy is the traditional symbol of remembrance, and some people claimed the white poppy was an insult to the fallen and to veterans, disrespecting their sacrifice.

From time to time over the years I have heard people express the concern that Remembrance Day and the red poppy glorified war. I've never thought that was particularly true. Certainly the origin of both the commemoration and the symbol seemed rooted in the hope that an annual remembrance of the bloodiest conflict in human history to that point would move people to say, "Never Again," to view armed conflict as a highly undesirable last resort.

But the narrative of Remembrance Day ebbs and flows over the years. At times, "Never Again" seems to give way to "Dulce et Decorum Est Pro Patria Mori" the Roman Horace's poetic claim that "it is sweet and proper to die for your country." Of late, it strikes me we have been leaning closer to the latter than the former.

The red poppy emerged as a symbol of remembrance, inspired by John McRae's poem, almost immediately after World War I and was adopted in the United States and throughout the Commonwealth by the early 1920s. But only a short time later, concerned that the public remembrance had become too martial and warlike, the white poppy was promoted as a commitment to peace. There may have been some who advocated wearing the white poppy instead of the red, but most of the material I've come across promoted wearing the two together.  The National Post has a very good backgrounder on the red and white poppy "controversy" here.  They point out that the coexistence of red and white poppies for Remembrance Day is taken pretty much for granted in the UK, the only place where white poppies have been continuously in production over the entire period. 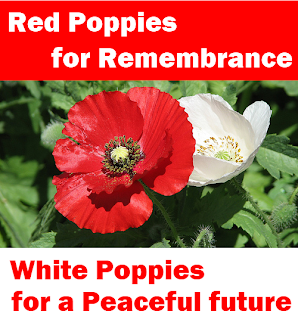 I don't buy for a second the idea that the white poppy (especially when worn together with the red) is disrespectful to veterans or to the fallen. This is a trumped up "controversy" designed to have citizens outraged over symbols and trifles instead of the real disdain and disrespect being meted out to veterans over the past couple of decades.

What is disrespectful is the way our federal governments (and not just the current one) have been scaling back support for veterans old and new. Pensions for wounded soldiers have been replaced with a paltry lump sum payment. Nine Veterans Affairs offices have been closed across the country. There are frequent and unfortunately credible reports of wounded soldiers having their discharges rushed through so that they will be released before they are eligible for a military pension.

So why did I wear a white poppy?

In part it was because I really do believe that the two sides of the Remembrance Day narrative need to be balanced. We honour the sacrifice of the fallen and, because we respect that sacrifice, we do not want to see more young men and women march off to war.

In part it was say that I do not buy into the antics of the right wing rage machine that deflect our attention from real issues by creating phony ones. The white poppy "controversy," like the "war on Christmas" "controversy," is a complete fraud from start to finish.

Mostly though, I wore a white poppy with my red poppy to take a stand against the bullying language I had seen all over social media, some of which seemed to condone if not call for violence against those who would wear a white poppy. If not for that, I doubt I'd've gone to the trouble of tracking down a white poppy to wear.

I served 25 years in the Royal Canadian Navy. Yes, it was all Reserve time and no, I never saw combat, but it was 25 years nonetheless. If anyone wants to suggest that I don't "respect the veterans" or don't "support the troops," then I challenge them to come and say it to my face instead of hiding like a coward behind a social media avatar.

Most (though not all) the commentary I saw condemning the white poppy - was from people who never served, who never put on our country's uniform. With all due respect, I don't feel any need to take lessons in patriotism from them.

And I can think of no greater disrespect to veterans and to the fallen than to self-censor on Remembrance Day and to take off a white poppy because of a handful of outraged bullies. I will not disrespect the war dead by feartly laying aside the freedom they won at such cost.
Posted by Malcolm+ at 5:56 PM 6 comments:

Time for talk is past.

This is the email I sent to Premier Brad Wall (with copies to NDP Leader Cam Broten and my MLA) earlier this afternoon regarding the planned Senate abolition resolution in the Saskatchewan Legislature.

I was very excited to hear that you intend to introduce a Senate abolition resolution in the Saskatchewan Legislature this fall. However my excitement swiftly turned to disappointment when, on reading the story further, I discovered that you are intending to introduce a “mind of the House” resolution rather than an actual constitutional amendment.

With respect, sir, this is a very grave strategic and tactical error.

As ably set out in this piece by Ian Peach, former Dean of Law at the University of New Brunswick and former constitutional advisor to the governments of Saskatchewan and Yukon, all that is required to initiate the process leading to Senate abolition is for the House of Commons or any provincial legislature to introduce the necessary amending resolution (http://www.punditsguide.ca/2013/06/guest-post-senate-abolition-as-a-matter-of-law-and-politics/). Dean Peach specifically recommends a “clean” resolution as follows:

That Sections 21 through 36 of the Constitution Act, 1867 be repealed.
(Please note that the initial reference to the wording of the resolution in the article transposes the second digits of the section numbers. Dean Peach corrects this in the comments section.)

The long and tedious processes leading to the patriation of the Constitution in 1982 and to the failed Meach Lake and Charlottetown proposals has created the false assumption that prior agreement is either necessary or advisable before initiating the amendment process.  In fact the Meach and Charlottetown experiences more aptly show that such comprehensive processes result in provincial governments creating constitutional wish lists, followed by extensive horse trading and backroom dealing which, in turn, render the final product politically unviable.

The current Senate scandal shows conclusively that time for talk is past and the time for action is upon us. A “mind of the House” resolution offers no real progress to advance this long festering issue towards a conclusion. By contrast, an amending resolution from the Saskatchewan Legislature starts the three year clock on a long overdue process to abolish the Senate. Instead of mitigating the bad smell of scandal, we will have begun to drain the cesspool.

You and your Government, with the support of Mr. Broten and the Official Opposition, have a chance to demonstrate real leadership on this file. I beg of you not to squander this opportunity.

PS: I will be posting a copy of this email to my blog at http://simplemassingpriest.blogspot.ca/ later today. It would be my intention to also post your response in due course.

For a while now, we have been working on a Mission Action Plan or a strategic plan for our parish. I'm thoroughly convinced that this kind of planning is important, but I'm also aware that well intentioned planning processes often create plans that are either vapid or incomprehensible - and frequently both. (And not only in Churchland, either.)

Sometimes the name and dedication of a church can give some guidance to mission planning. I've heard of parishes dedicated to St. Luke that exercise a particular ministry towards physicians, nurses and other health care workers, for example.

Our parish church is dedicated to St. James the Apostle. Over the past year or so, this has led to some conversations with my unpaid curate about the prospect of having some members of the parish walk the Camino in Spain, the traditional pilgrimage to the relics of St. James at Santiago de Compostella.

Which got me to thinking ...

One of the central images of discipleship is the journey.  Jesus was constantly telling people, "Follow me." The Gospel narratives about Jesus teaching ministry are all set in the context of journeys to and from Jerusalem. As Geoffrey Tristram, SSJE recently preached:

Scripture is filled with great journeys. Jacob’s flight from his brother Esau, Joseph sold into slavery, and his journey into Egypt. The great journey of the Exodus from Egypt to the Promised Land. The journey of the wise men to see Jesus. Jesus’ journey into the wilderness. Paul’s journey from Jerusalem to Damascus. It seems that God loves to invite us to make journeys. Because through the journey God teaches us, forms us, invites us to grow and change into the person God longs for us to be. To become fully who we were created to be.

I have often been struck by a tagline I first heard of in association with All Saints Church in Pasadena.  I don't know if it originated there, but it has seemed to me to capture the nature of post-modern evangelism. I'll admit I've cribbed the concept.

Wherever you've come from ...

Wherever you are on your journey of faith ...You are welcome here.

So the invitation is not, per se, to join our congregation or to affiliate with our brand of Christianity. It is not to sign on to the Thirty-Nine Articles nor to conform to a particular understanding of the Eucharistic Mystery. It is an invitation to walk together in faith, into deeper faith. 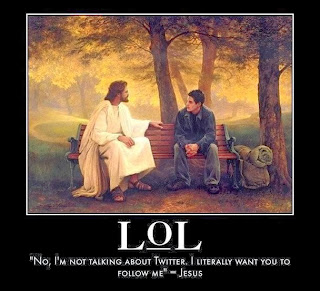