Recently, Rabble columnist Duncan Cameron posted an article about the de facto Liberal - Conservative coalition that has been governing Canada since the 2006 federal election. The latter part of the article - outlining case after case of the Liberals supporting the Harper agenda - is actually pretty sound.

Unfortunately, just about everything Cameron has to say in the first part of the column about the Canadian electoral system and how Prime Ministers are chosen and unseated is simply wrong. In fairness, every one of Cameron's mistakes represents the confusion held by most Canadians. But most Canadians don't pretend to be part of the punditocracy.

The King Byng Thing pretty clearly established that, except in very rare and as yet largely undefined extreme circumstances, the Governor General (or Lieutenant Governor) is obliged to follow the advice of the incumbent prime minister. That, I suspect, is the basis on which Governor General Jean granted Harper his prorogation in 2008. Vice regals, properly, act only on advice from a first minister. 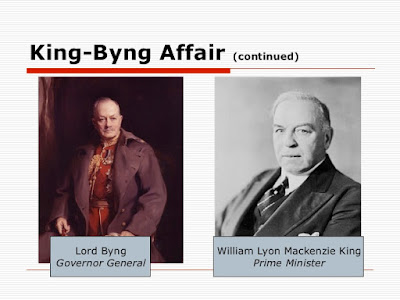 The precise application of the principles arising from the King Byng Thing are still a little dicey. When it was clear, in 1985, that Conservative Premier Frank Miller was going to lose the confidence of the Ontario Provincial Parliament very soon after the election, Lieutenant Governor Aird was able to call on Liberal leader David Peterson to form a government. Unlike the King ministry of 1925 - 26, which had held confidence for several months, Miller had not actually won confidence on any substantial vote since the election.

By the same token, in the Nova Scotia election of 1998, which resulted in the incumbent Liberals and the surging NDP each winning 19 seats (with the Conservatives at 14), it was understood that the Liberal leader had the right to seek confidence first. This was due solely to the fact that Russell MacLellan was the incumbent premier. Had the government failed to attain (or very quickly lost) confidence, NDP leader Robert Chisholm would have his chance to try. But since the Liberals managed to retain confidence for more than a year, the Lieutenant Governor followed the premier's advice to call an election in 1999.

There is one modern case where a vice regal person is rumoured to have threatened the use of the royal prerogative without advice. As the Saskatchewan legislature neared the end of its electoral life in 1991, Premier Grant Devine was tardy in advising Lieutenant Governor Sylvia Fedoruk to issue the writ for an election. It isn't clear how he proposed to continue as premier with no legislature, but a handful of fanciful arguments were being floated. As the deadline approached, conventional wisdom has it, Lieutenant Governor Fedoruk did not threaten to call the election herself, without advice. In keeping with an interpretation of the King Byng precedent, her apparent threat was to dismiss Devine as premier and to call on a new premier (whoever that might be) to issue her the necessary advice.

None of these (except the last) are obscure precedents, yet somehow there are far too many clueless pundits who keep getting it wrong.

So here's the real skinny.

On the morning of October 20, 2015, regardless of what happened the day before, Stephen Harper will still be Prime Minister of Canada. The Governor General, while having perhaps a little more flexibility that usual, will still have a general obligation to accept his prime minister's advice.

If the Conservatives win a majority of seats in the House of Commons, Prime Minister Harper will carry on as before. If the New Democrats or the Liberals win a majority of seats, presumably Mr. Harper will submit his resignation to Governor General Johnston. His last piece of advice will be to invite Mr. Mulcair or Mr. Trudeau to form a government. Having accepted that advice, the Governor General will normally ask Mr. Harper to carry on as Prime Minister on a caretaker basis until the new ministry is sworn in.

But if no party wins a majority of seats, all bets are off. Yes, much of the pundit class will have declared a Conservative or New Democrat or Liberal minority government, but none of that is actually true. What will actually happen is that Stephen Harper will make a calculation.

I frankly presume that, if the Mr. Harper's Conservatives have the largest number of seats, he will advise the Governor General that he intends to seek the confidence of the House of Commons. I think Mr. Harper's chances are pretty good, especially if the Liberals are the third party. For the Liberals, the humiliation of supporting the Harper Conservatives would be less daunting than the prospect of installing an NDP ministry under Prime Minister Thomas Mulcair.

Equally, I presume that if the Harper Conservatives are in third, the prime minister will advise calling on the leader of the largest party. He could mischievously recommend something different, although that creates an interesting dilemma for the Governor General about whether to accept the advice.

Where it gets really interesting is if the Conservatives are second. Again, if the Conservatives are second to the Liberals, I see little point in Mr. Harper trying to play King to David Johnston's Byng. But if they are second to the New Democrats, I suspect he will try to win confidence anyway. While I think his chances of pulling it off are not quite so good as if he's got the largest number of seats, I still think there's a better than even chance the Liberals would vote him confidence.

Frankly, if the Conservatives are first or second in seats in a minority Parliament, it behooves Mr. Harper to seek confidence regardless. It costs him nothing to try, no matter the scenario, and there is a better than even chance of success he can win the support of the Liberal Party to retain power. After all, as Duncan Cameron has observed, we've had a Liberal - Conservative governing partnership for almost a decade anyway.

I hope the punditocracy will exercise a little restraint - and a little constitutionality - on the evening of October 19. But I doubt they actually will. There is rampant ignorance about how our political system actually works, even among the political class.
Posted by Malcolm+ at 9:19 PM 2 comments: