The Stadium, the Civic Election and Captive Campaigning 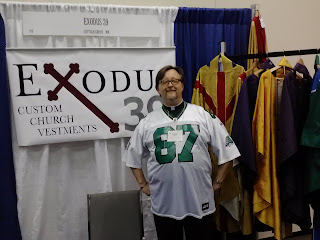 (Me in my 'Rider gear
at the Episcopal Church General Convention
in Indianapolis this summer.)﻿

I'm a huge 'Rider fan and a long time season ticket holder.  I even agree with the idea that it makes more sense to replace the current Mosaic Stadium with a new facility rather than refurbish it.

I didn't appreciate being campaigned at on Saturday, when I was at Mosaic Stadium to watch the 'Riders play Montreal.  I also didn't care to get an email from Club Chairman Roger Brandvold this morning attempting to influence my vote.

I'm not questioning the Football Club's right to make these pitches.  But I don't have to appreciate them.

In any event, here's the email I sent back to Chairman Brandvold outlining my problems with the current proposal for a new stadium and with the politicians who have mucked up the project from the start.

While I don't question the organization's right to advocate for a new stadium, I really didn't buy 'Rider season tickets all these years in order to be pressured to support candidates whose records indicate they consistently place corporate interests ahead of citizens' interests.

They have failed to highlight the proposed use of the current Taylor Field site, even though an emphasis on use for social housing might have opened the federal coffers. They have failed to ensure proper public consultation, rushing the approvals through in the dying days of a lame duck Council.

I'm a 'Rider fan and a long time season ticket holder. And unlike some critics of this plan, I actually am inclined to agree that a new stadium is the right way to go. But I cannot support this fly-by-night process, nor can I feel any confidence that a Council led by the same usual suspects could properly manage this project.

If the present Council leadership were on the 'Rider roster and played with a comparable level of skill and effectiveness, they'd be cut after a single game, not offered a four year contract.

I'll happily support a new stadium when I'm presented with a proper plan, part of a larger development and redevelopment strategy and with appropriate levels of federal, provincial and private sector funding. I'm not prepared to support a slate of incumbents who have failed in every aspect. 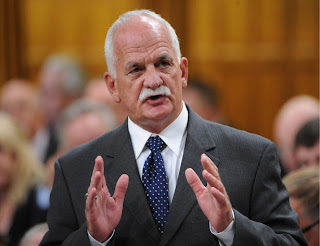 Ironically, Mr. Toews is a Mennonite whose family came to Canada to escape religious persecution.
Posted by Malcolm+ at 12:03 AM 7 comments: