CORRECTION: In this post, I referred to Archbishop Peers as "the senior primate of the Anglican Communion" at the time of his retirement. I know that I had picked up that piece of information during an earlier exercise unrelated to my anti-Covenant activities. It turns out, however, that this is not correct. Archbishop Robert (Robin) Eames was installed as Primate of All Ireland exactly 62 days earlier than Archbishop Peers, and continued in office more than two years afterwards. This doesn't really affect any substantive point of my post, but the Michael Peers I know and love is a stickler for getting things right. My apologies to both Archbishops. 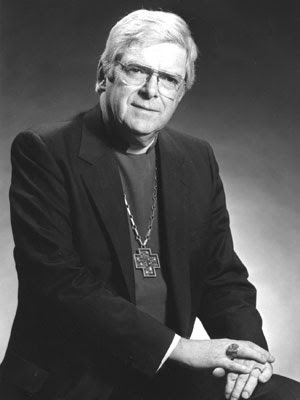 One of the many annoying rhetorical fourishes of late has been the claim that opposition to the proposed Anglican Covenant constitutes a desire to "change" the Anglican Communion into a "loose-knit federation" of autonomous churches. Of course, this assumes an entirely revisionist view of Anglican history - actually, less revisionist than Orwellian.

International Anglicanism has always been a relationship among autonomous churches. While there were occasional communications among the Church of England, the Scottish Episcopal Church and the Episcopal Church in the United States in the early days, the actual relationship was largely one of (mostly benign) neglect. The English church did assist the Scottish 'Piskies to re-establish episcopacy, and the two British churches both ordained bishops for the Americans.

At the time, both the English and the Scots offered some guidance to the newly forming American church, but neither ever claimed authority. In each case, the Americans discerned for themselves what advice to take and what to leave aside. They did reinstate the Nicene Creed into the eucharistic rite, as suggested by the Church of England. They did not accept the English advice to accord more power to the House of Bishops than to the House of Deputies.

Mutual recognition of ministry was a bit of a dodgy issue. The legislation which enabled the English to ordain bishops for the Americans expressly stated that those so ordained and those ordained by them would not be permitted to function in England. The ordination of the fourth American bishop by the CofE was partly driven by the fact that the English thought the Scottish episcopal pedigree of America's first bishop a bit dodgy.

When he retired in 2004, Michael Peers (who confirmed and ordained me) was the senior primate of the Anglican Communion. Here is what he had to say in 2000, four years before this Covenant silliness ever raised its head.

We have become that for many reasons, among which are the struggles of the sixteenth century and an intuition about the value of inculturation, rooted in the Incarnation, which has led us to locate final authority within local churches.

We are not a papal church and we are not a confessional church. We are autonomous churches held together in a fellowship of common faith dating from the creeds and councils, recognizing the presidency of a primus inter pares (the Archbishop of Canterbury), often struggling with inter-church and intra-church tension, but accepting that as the price of the liberty and autonomy that we cherish.

As I said to the members of the Council of General Synod last month, the price of this includes a certain measure of messiness.' 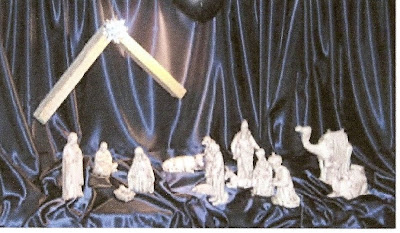 My first Christmas at the parish where I currently hang my biretta, we had a great adventure searching for Jesus. I blogged it here.

Although the choreography was slightly altered this year (with Mary and Joseph at the front of the choir stalls on the north side and the shepherds on the south), and although one of the magi met with a mishap (Mind the Camels sign notwithstanding), I represent the story in its original. The picture at the top is the creche inside the altar.

Tonight, Mary and Joseph, and after some panicked moments, the Baby Jesus, were all installed in their places. The shepherds were "summoned to his stable" during the gradual hymn. And the magi were now half way up the aisle - accompanied by a helpful Mind the Camels sign prepared by my good wife.

It was a good celebration in a community which seems increasingly hopeful and future oriented. And generally united. There is no parish on earth that doesn't have some divisions and tensions. But this little parish seem quite determined to be a
family together.

I didn't recognize all of the A and mostly B List celebrities - and seeing the chap from Milli Vanilli begged the obvious question. But I did like the video.

I've been stewing over this matter for a few weeks now, but this piece of information has moved me to say something.


It turns out the Diocese of St. Asaph in the Church of Wales (yr Eglwys yng Nghymru) is looking for a Communications Officer. That can only be a good thing, because the Bishop of St. Asaph desperately needs some competent public relations support.


You will recall that, around the time of the launch of the No Anglican Covenant Coalition, the Bishop of St. Asaph, Gregory Cameron embarrassed himself, describing critics, opponents and sceptics of the proposed Anglican Covenant as: "Little Englanders" and "the nearest to an ecclesiastical BNP."


Let us be clear. Bishop Cameron was saying that critics of the proposed Anglican Covenant - a document which he had no small part in drafting as Secretary of the Covenant Design Group - are fascists. The BNP or British National Party is the largest fascist political party in the United Kingdom.


Now, Bishop Cameron has since said that he didn't really mean it. Or at least, not part of it. Or perhaps he did. Except for maybe possibly he might not have meant all of it. Unless he did.


In an incoherent bleating quoted in The Church of Ireland Gazette, Bishop Cameron rambles as follows:


I have to accept that the comparison to the BNP has offended because some people have taken this as an accusation of racism. This was not my intention, and I have never wished to make such an accusation. The Church Times advert reminded me strongly of the rhetoric of the far right in British politics . . .

Now, I'd like you all to go re-read that quote. You'll notice that this isn't even the usual politician's non-apology apology:

I'm sorry you were offended.

Here is my unsolicited advice to Bishop Cameron:


When you've said something bone-headedly stupid and mind-numbingly offensive, your clarification should include either the word sorry or the word apologize - or possibly both. Otherwise, don't bother saying anything at all, since you're only going to embarrass yourself further.


Perhaps that new Communications Officer might be able to teach Bishop Cameron how to behave in public.


In the meantime, here is a good Canadian sketch about non-apologies.

Let it never be said that 'Rider fans don't fulfill their obligations. And the real winner here is the sick kids at Hopitale Ste Justine in Montreal. 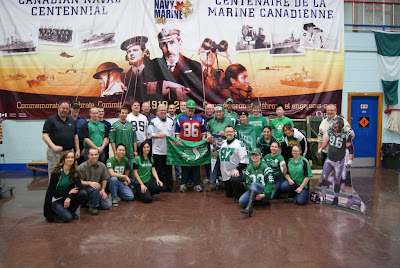 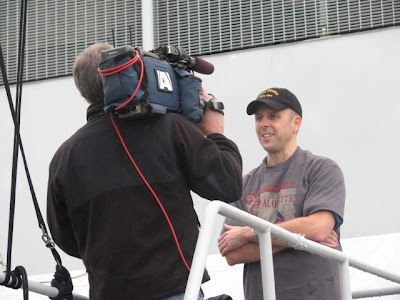 The first picture is the Captain and crew of HMCS QUEEN - with the poor CO decked out in an Als jersey.
.
The second picture is the XO of HMCS REGINA being interviewed (in an Als t-shirt) about the wager. I wasn't able to download or embed the TV clip of the flag being raised on board Regina.
.
I will note three things.

Canon Alan Perry, a Canadian expert on canon law in the Anglican tradition, has started a amusingly named blog called Insert Catchy Blog Title Here. His latest post is well worth the read.

Having previously put paid to the pro-Covenant proof-texting claims that the autonomy of member churches is respected, Canon Perry has written yet another brilliant expose on the proposed Anglican Covenant. In this case, he focusses on the deliberate vagueness regarding the phrase controversial action in the final draft of the document.

Drexel Gomez's Covenant - whether negligently or deliberately - fails to establish any sort of due process for determining what is or is not a controversial action, what is or is not an action incompatible with the Covenant or how relational consequences are to be applied.

The Covenant’s assurances of Provincial autonomy have been likened to telling a child that he can decide for himself whether to eat his broccoli or not, but if he doesn’t eat the broccoli he won’t get any pudding. With respect to what the rules are, the Covenant is like putting dinner in front of a child with a vague warning that he must eat properly or risk some unspecified “relational consequences”. And what does “properly” mean? Using the correct utensils (without being told what that means)? Eating the various dishes in a correct (but unspecified) sequence? Correct use of condiments (whatever that might be)? Eating the broccoli? Cleaning the plate? Stopping when full? Some unspecified combination of the above? In the absence of a clear rule, what is the poor child to do?

It's difficult even for the most reasonable person to obey the rules if the rules are only to be made up after the fact based on the random grievance of people who don't get their way. 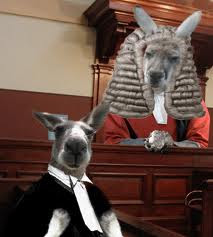 Canon Perry, ever so discreetly, says:

Lack of clarity of what the rules are is a recipe for arbitrariness. It is a denial of the concept of the Rule of Law, opposite of which is the Rule of Men.

Or, to put it another way, here is what canon law and procedural fairness will look like in the New and Improved Post-Covenant Anglican Communion.
Posted by Malcolm+ at 12:09 AM 2 comments: