The Lord is risen indeed! Alleluia!

Ever since one particular Easter Vigil some years ago - when our son was being confirmed - my dear wife has associated the Easter Vigil with this Mr. Bean sketch from Rowan Atkinson.

The sketch includes, in addition to the always wonderful Atkinson, the marvellous English comic actor Richard Briers, who among other film and television credits, played the Rev'd Philip Lambe in the series All in Good Faith.

It's the Beanian "Alleluia" in Lasst uns erfreuen that moves my sweetheart to gales of laughter - and causes her to associate the sketch with the Easter Vigil.

Five young people from the parish were confirmed this evening - all of them quite fetching in their "We're on a mission from God" bunnyhugs. 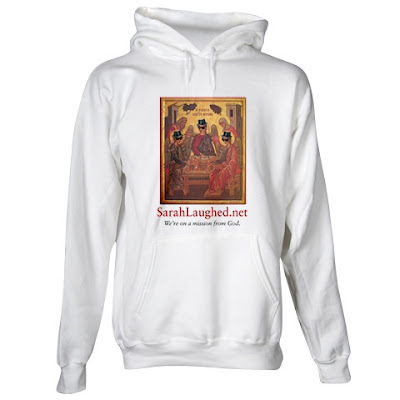 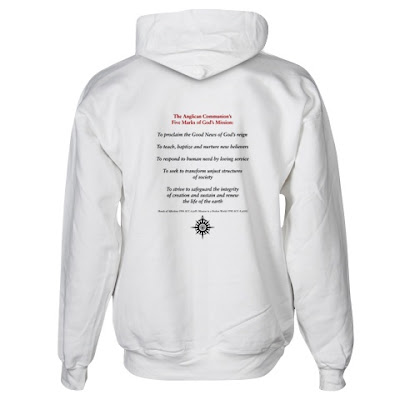 The bunnyhugs (that's what we call them around here) are via Sarah Laughed and Cafe Press. The front depicts Abraham and Sarah entertaining angels unawares - except that the angels are all decked out in Blues Brothers style hats and sunglasses. On the back we find the Anglican Communion's Five Marks of Mission.

Our five young confirmands are, like Jake and Elwood Blues, "on a mission from God." They have been sent into the world - along with the rest of us - to proclaim the Good News of the Death and Resurrection of Jesus Christ.

Christos Voskres!
Posted by Malcolm+ at 12:12 AM

My wife wandered in to look over my shoulder while Mr. Bean was attending church. We didn't actually see all of it. The tears of laughter kept fogging our vision. Mr. Bean has not been seen visiting our parish while I was in the pulpit, however, I have performed the part well when visiting other churches.

I love the Blues Bros. shirt, but find it disturbing that the biggest words on it are the name of a web address.

Not my design. But the website is, in that bregard, the producer of the product (with an assist from CafePress).