(Warning - does contain church stuff - it will just take you a while to get there.)

I attended the Canadian Public Relations Society annual conference earlier this week. Like every conference, I got to see so many of those wonderful friends I usually only see once a year. I got to make at least one obscure procedural point at the Society's annual general meeting. I got to have a real Halifax Donair at Pizza Corner. And I got to dance - until I threw out my knee anyway.

Oh. And there was some professional development as well. 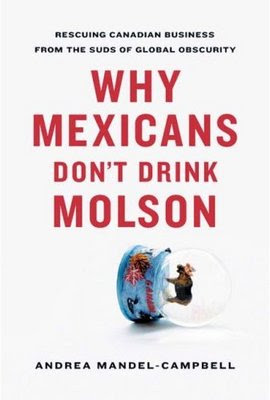 It was a good presentation (apart from her manifest struggle to pronounce "Saskatchewan"). Her book - and her presentation - used the venerable old Montreal brewery as a parable for Canada's failure to live up to its international potential as an economic mover and shaker.

Molson was one of Canada's oldest companies, established in 1786. It was one of the oldest commercial breweries in the world - older than Heineken, for example. It made good beer. It was located in Canada, with unfettered access to an almost limited supply of the two most important ingredients in beer - water and barley. It functioned in an equitable duopoly with the similarly venerable Labatt's brewery. The two companies controlled the commercial beer market throughout Canada for most of the twentieth century. And in the province of Ontario - the most profitable beer market in the world - the two "competitors" even controlled the distribution through The Beer Store.

Neither company invested much in branding. Sure there were different product lines (Canadian, Export and Pilsner or Blue, 50 and Schooner). But all the beer from either brewery came in the same stubby brown bottle, packed with 11 or 23 identical beers in boxes which were, apart from the labels, pretty much identical.

As opposed to Corona.

I stopped drinking before I ever had a Corona. Apparently Corona isn't great beer. You have to put a lime in it to make it drinkable. It isn't even the best beer in Mexico, I'm told. Corona's just the crap they sell to college kids and tourists.

But Corona is one of the world's best selling brands of beer.

Corona is one of the world's best selling brands of beer despite having none of the advantages that Molson had.

You can even buy Corona in Canada. Even in Ontario. Even in The Beer Store. Of course, the Corona you buy in Canada is made by . . . Molson.

Corona is more than beer. It's a brand.

But have you ever tried to buy a Molson Canadian in Mexico? In California? In Belgium? Go ahead. I dare you. Try it.

So, why is it that Corona - the middlin' beer from a country with limited access to water and barley, and without an in-built market monopoly / duopoly - is among the world's best selling brands of beer?

And why is it that Canadian - the good beer with unlimited access to water and barley, with an in-built duopoly, with access to the most profitable beer market in the world, with control over distribution in that market, with the intangible asset of one of the longest established brands - is generally unavailable outside of Canada. And why is it that both Molson and Labatt's have ceased to exist as Canadian owned Canadian breweries? Both are now part of international conglomerates with limited Canadian equity. And once the Molson Coors amalgamation with SABMiller is complete, it is expected that the Molson name will disappear outside of Canada - like the Labatt name has already done.

(It is ironic that the famous I Am Canadian commercial actually came out after Molson had ceased to be Canadian.)


Mandel-Campbell essentially argues that the two companies are the victim of their own success. As big fish in a small pond, they made no effort to compete, except with each other. And as we've seen, there was precious little competition between them. The market duopoly was simply too comfortable.

When Heineken and Corona and Bass and Miller began to position themselves as premium products, Molson and Labatt saw no reason to respond. Everything was fine in the Canadian beer duopoly. The money was rolling in, and both companies were fat, dumb and happy.

And completely unprepared when it turned out that Canadians were interested in premium products and value-added branding.

So, what does this have to do with things ecclesiastical?

We went along quite comfortably for several hundred years. All was well. We opened the doors and the people came through them. We were fat, dumb and happy. We saw no need to change.

The ecclesiastical model we had worked just fine in Christendom.

But we're not in Christendom any more.

It isn't enough, any more, to think that our sole mission is to keep the doors open for when someone turns up.

Our mission is the one Jesus gave us, to proclaim his name to all people.

So, let's be about it then.

And here is a Little Bit of Fry and Laurie to round out our business analysis of Anglican market share.

Who are those guys?
And the post was more than on target.
CP

Fry and Laurie are a pair of funny Englishmen you may have seen in Blackadder or in Jeeves and Wooster. I understand the clip is from a sketch comedy show they had called A Little Bit of Fry and Laurie. Hugh Laurie also played the father in the movie Stuart Little, and currently stars on the American series House.

Hope you enjoyed it.

I'm a little surprised that you are not getting more comments. Seems to me these are matters worthy of some conversation.

My readership seems to be sinking. Perhaps if you linked to it.

I have loved the I am Canadian ad since the first time I saw it, and absolutely crumbled with laughter. It is so clever and so joyously assertive.

Great analysis Malcolm! I never thought about the correlation between the Canadian Beer industry and The "Big Three" churches in Canada.

Between the two of us -- I count my FaceBook status update... I am going to church to listen to a sermon about beer and link to this blog, as contribution -- we have managed to get Cheston interested in church!!!

Yep, possibly only momentarily. But a moment is longer than we had his interest, for more than the pancake or turkey supper, in the past!

He may actually tell some friends about those crazy Anglicans over north of the tracks. LOL

Hmmm.., I wonder how many Facebook friends 'bit' on our status updates???