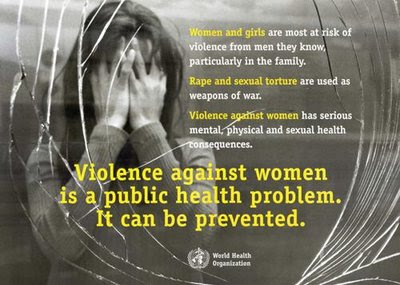 Wednesday at Lambeth, the bishops and their spouses met together in the Big Blue Tent.

Well, not exactly together. The men were on one side of the tent and the women on the other.

The subject for the day was violence - specifically violence against women.

My bishop relates his experience of the day here.

There were a number of aspects to the event. It included a Bible study about the rape of Tamar (2 Samuel 13: 1-22). It also included a dramatic presentation which intertwined several Gospel accounts of Jesus healing women.

Many participants have spoken or blogged about it since. All those who have commented have said that it was a powerful morning.

But most of the media fallout has been about comments by Catherine Roskam, a suffragan to the Bishop of New York.

What did she say?

Violence is disturbing - and violence against women particularly so.

What disturbs me about this story is the verbal violence and dishonesty directed against this bishop - this woman bishop - for having the temerity to speak the truth.

In doing so, they have lied again and again, deliberately twisting what Bishop Catherine said to serve their own hatemongering agenda.


The "conservatives" are in full throated lynch mode. Even the more sensible conservatives have been dragged along with the mob.

The media coverage, even from respectable periodicals like the Times of London and the Guardian, has been shallow and sensationalist. Ruth and Riazat, could you please show me where Bishop Catherine said that domestic violence is not a problem in the United States? Of course you can't, because she didn't.

Violence against women is a fact.

It is a deplorable fact. A shameful fact. A hideous fact.

But it is a fact.

It happens in North America, in England, in Africa, in every society where men and women live together. (And yes, neither is domestic violence unknown among gay and lesbian couples.)

It happens in poor homes and wealthy.

Perhaps it does not happen in episcopal households.

But I doubt it.

After all, if it never happened in episcopal households, why has this been a consistent request from the spouses conference prior to both the last Lambeth and this one?

And why is it that the seating arrangements - separating men and women - was explained in terms of making it safe for women to participate?

Methinks that those in the lynch mob screaming the loudest are perhaps those whose own ox has been gored.
Posted by Malcolm+ at 11:53 PM

I found it seriously offensive that one newspaper story (I forget which) only interviewed bishops of colour to enquire whether they had ever beaten their wives.

There is a passage in John which often gets little light of day due to the fact it occurs shortly after John 3:16, on which people get fixated - especially when text-proofing. It speaks about deeds being done in darkness because they cannot stand the light.

John 3:16 should never be singled as a text which stands alone. It needs 3:17 - 21, at the least, to help us understand better. And remember that Nicodemus, who starts off this chapter came to Jesus in the darkness of night. There's a reason for John writing that.

I find it very strange that as Christians we get so upset when things are brought into the light. We would prefer to keep them in the darkness - we want gays to go back into the closet, we don't want to know about violence to women. If they stay in the darkness we don't have to acknowledge them.

So rather than deal with the important issues - in this case, violence against women - people have preferred to focus on the messenger. We don't want things exposed, it means we are called to act if we truly follow the two great commandments. When things are kept in the dark, we don't have to respond because we can pretend they don't exist.

You do bring up very good points. If violence is not an issue, why the request for time to be spent on it. Thank you.