Searching for the Christ Child - Reprise 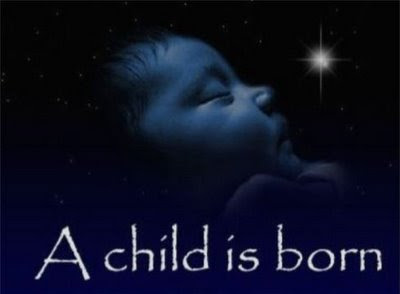 From last December:
The title isn't quite so allegorical as you think. We actually spent about ten minutes before the Christmas Eve service desperately seeking the Baby Jesus for the main creche at the parish where I serve as interim priest.
It is actually a very interesting creche, set up inside the altar itself. A simple wooden chevron suggests the stable, while the remaining figures stand on black satin.
It was already in place on Sunday last. Actually in the Sunday before last as we compromised the calendar in the interest of the children's pageant. But Sunday last the creche had only its minimalist roof, one ox and one ass. Mary and Joseph were not far away - standing on the altar pavement - but they hadn't arrived yet. The shepherds weren't there yet either, out tending their sheep on the edge of the pulpit. And the magi were in the middle of the aisle at the back of the church, still some ways away.
Tonight, Mary and Joseph, and after some panicked moments, the Baby Jesus, were all installed in their places. The shepherds were "summoned to his stable" during the gradual hymn. And the magi were now half way up the aisle - accompanied by a helpful "Mind the Camels" sign prepared by my good wife.
It was a good celebration in a community which seems increasingly hopeful and future oriented. And generally united. There is no parish on earth that doesn't have some divisions and tensions. But this little parish seem quite determined to be a family together.
snip
We found Jesus tonight at St. James - literally, allegorically and eucharistically. We all came to the same table, together. That is where we belong in worship - at the same table, together.
Posted by Malcolm+ at 9:48 AM

I found the snip the most interesting bit...

Thanks for this blog.
I hope you'll visit mine: "Liturgy" www.liturgy.co.nz
You may be particularly interested to write about the new Anglican Communion:
http://tinyurl.com/trueanglicancommunion
If you link to Liturgy
please let me know so I acknowledge that & link back.

Blessings to you & yours

Malcolm, you made me laugh with your frantic search for the Baby Jesus. What if you hadn't found him?

In the end you found Baby Jesus, and the real Jesus became incarnate at St. James. All's well that ends well. Forever and ever. Amen.