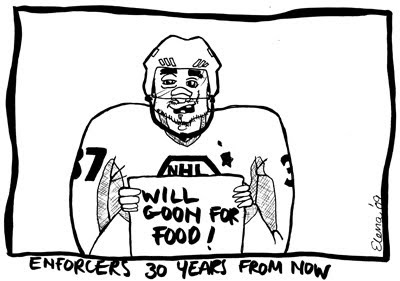 It wasn't a hockey game. It was a disgrace.
A total of 346 penalty minutes (all but four minutes for violence). Ten game misconducts.
The New York Islanders weren't interested in playing hockey at all. This was about violence, intimidation and retaliation.
So why is it that professional football rarely sees fights?
It's because both the CFL and the NFL are run by people who . . . aren't brainless morons. (As bad as CFL officiating usually is, at least thuggish behaviour will get it's comeuppance.)
In professional football, fighting is expensive. In addition to penalty yards assessed, a player who starts a fight is almost certain to be expelled from the game and significantly fined.
In hockey, idiots like Don Cherry celebrate the brawlers, incompetents like Campbell tolerate the brawers, and fools like Bettman . . . well, hasn't Bettman already demonstrated that he doesn't have the talent to run a roadside lemonade stand?
I've long since stopped watching the pathetic joke that these useless jackasses pretend is a professional sports league. I'll happily watch international hockey - y'know, games where actual hockey and actually athletic skill still matter.
But the NHL? Why bother?
Posted by Malcolm+ at 11:19 AM

I don't disagree with you, but I do think there's more to the lack of fighting in football thank you've said. Football is an *extremely* physically aggressive game. Players rarely have an excess of aggression because every single play they are hitting, tackling, dodging - it's practically a stylized version of a street brawl. Hockey players don't have that purely physical part of the game - fighting is a way for them to vent.

That said, I think the fighting, and the encouragement of that sort of behaviour in the NHL is disgusting, and I agree completely with you that people like Don Cherry (for whom I have some special names that I won't share here) are a HUGE part of the problem. If players didn't get *paid* for acting like goons and rewarded for fighting, they wouldn't do it.