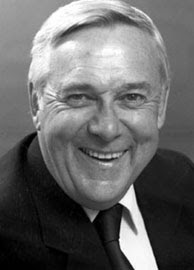 Former Saskatchewan Premier Allan Blakeney has died today after what is described as a "short battle with cancer."

He served this province for nearly 40 years, having come west from Nova Scotia in 1950 to work in the Saskatchewan public service. Elected to the provincial Legislature in 1960, he was Minister of Health during the implementation of the first universal single-payor health plan in North America. (I once said, in his hearing, that he had been Health Minister during the doctors strike. He was quick to correct me.) He was CCF-NDP leader from 1970 to 1988, and Premier of Saskatchewan from 1971 - 1982. He subsequently taught law at the University of Saskatchewan.

My favourite memory of AEB came several years after he had left active politics. The cabinet minister I was writing speeches for those days like to quote Blakeney's predecessor as CCF-NDP leader, Woodrow Lloyd, but for a particular speech, we had decided she should quote Allan Blakeney instead.

Having searched high and low (biographies, old speeches, Hansard, consults with former speechwriters), I finally did what any sensible speechwriter would do. I called him. It happened to be March 25, 1998.

The first part of the conversation was amazing enough. After indicating he couldn't think of a single thing he'd said that would fit what I needed, it only took a vague reference to a comment from a former speechwriter to set him off on an extended riff from his "speech to the party council after the 1978 election." I had what I needed.

Then I asked the Bridgewater, Nova Scotia native what he thought of the previous day's election results in Nova Scotia. (The NDP came from a mere four seats at dissolution to winning 19 seats in the provinccial legislature. This left the Liberals and NDP tied for the largest number of seats with the Liberals, as the incumbent government, with the right to seek the confidence of the House first.)

He told me that, "had the NDP gotten one more seat or the Liberals one fewer," I wouldn't have reached him because he had committed to the NSNDP that he would come out to manage their transition to power should they form a government.

This was a brilliant move on the part of then NSNDP leader Robert Chisolm (now running federally in Dartmouth - Cole Harbour, NS) to take advantage of AEB's 38 years as a provincial public servant, MLA, cabinet minister and premier in Saskatchewan.

(Every one who ever heard AEB speak is hearing is unique, clipped pronunciation of "particularly.")

"If only Bob Rae had been so wise."

As a public speaker, he was no Tommy Douglas. But he was a brilliant and incisive thinker who made both Saskatchewan and Canada a better place.

May he rest in peace and rise in glory.
Posted by Malcolm+ at 5:22 PM

A wonderful tribute Malcolm. I didn't ever really get to know him well, but there was a time when I saw Ann as my second mom. I elementary school, I spent more time at their house than I did at mine. David and I were best friends all through elementary school. He was a fine statesman, and the most down-to-earth brilliant person I have ever met.

That was excellent Malcolm! I so much liked the personal touch!

I know that the past is always seen through rose-coloured glasses, but there don't seem to be many public servants like him anymore.