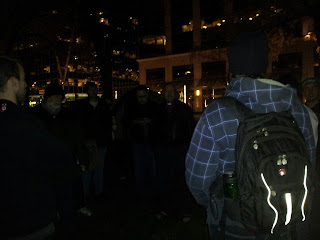 We live in a strange time when the Governor of the Bank of Canada, a former US Treasury Secretary, some of the richest men on the planet and even the Conference Board of Canada can acknowlede that the system is broken and that income inequality is breaking the system even further, yet the political system is seemingly unaware of the problem.
Posted by Malcolm+ at 12:48 AM

A warm and compassionate person, the Bishop's sincerity is undoubted. Nor is there any reason to doubt that those occupying the park appreciate the politics and economics that have and do shape their circumstances. However, I wonder what the tent-dwellers would say if he asked them what they thought of Habitat for Humanity, an enterprise that he strongly supports. I wonder how he would respond if he were asked why a family, newly arrived from overseas, probably with education and training and certainly with strong community support---for this is one of Habitat's preconditions---gets a spanking new house while they, the tent people, long time residents of the province and perhaps its original custodians, are de facto shut-out of the programme.

While those arrived from overseas CAN qualify for a Habitat for Humanity house, that is not a prerequisite for the program. While I don't know all the qualifying requirements, I have been involved in Habitat builds where the house went to working oor families.

Thanks for the insights from the Bishop's "Episcopal Tour" of Occupy Regina.

I'm a United Church cleric with Occupy Saskatoon; I've been involved since planning began. My post graduate training is in ethics. I try to examine the ethical dimensions of what is happening.

When adjusted for inflation, the current average Canadian wage is $2,000 less that what people were making in 1978. At the same time, the average house cost in Canada is about $350,000.