"Christianity is not an institution . . ."

One of the study groups in the parish meets at a local restaurant for breakfast every Saturday morning to discuss another chapter of the book Glorious Companions - Five Centuries of Anglican Spirituality by the Revd Richard H. Schmidt.  Each chapter consists of a brief biography of a significant figure from the Anglican tradition, followed by a few pages of excerpts from some of their writings.  The book begins with Archbishop Thomas Cranmer, ends with Archbishop Desmond Tutu and covers a wide range of Anglican thinkers and writers in between. 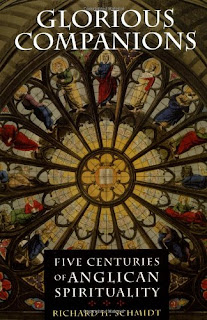 Today, we were discussing Roland Allen, an English priest and missionary whose writings mostly date from the first half of the 20th century.  Allen's provocative claim to fame was to challenge the missionary methods of his time, comparing them to the methods of St. Paul and finding them wanting.  Where St. Paul had quickly raised up local leadership and handed the missionary enterprise over, the missionaries of Allen's time were more inclined to encourage a culture of dependence on the missionary, the mission society and the sending church.  Allen advocated a return to the apostolic model, with leadership quickly handed over to locally ordained clergy and lay people.

Now, it is not at all uncommon that our breakfast discussion may take us far away from the initial subject - although we always seem to find a means to make the connection back.  Today was no different.  While we kept coming back to discuss the Church much closer to home, we kept referring back to Allen, and in particular to his observation:


Christianity is not an institution, but a principle of life.  By imposing an institution we tend to obscure the truly spiritual character of our work.


I'm sure I'm not the only person who has ever seen the Church get caught up in details about institutional survival while seeming to forget about the imperative of the Gospel.  And not only seen it, but gotten caught up in it.

Church buildings can be a very useful resource for a thriving congregation.  They are a place to gather, for worship, for educational programs, for fellowship.  They can be a means of proclaiming the presence and existence of a Christian community.  They can even be a revenue stream.  But when a congregation isn't thriving, the building can become a burden - especially as it ages.  The congregational leadership start talking more and more and more about the physical plant, about the need for repair, about the possibility of further erosion of the fabric, and less and less and less about the mission which the building had orginially been intended to support.  Likewise parochial or decanal or diocesan structures can support the work of the Church, but can equally become a drain on the spiritual vitality of the Church.

Creeping institutionalization has all sorts of unanticipated effects.  The appointment of stipendiary clergy tends to mean that, as the "full-time staff," they start picking up little jobs that aren't strictly part of their vocation.  Whether against their will or at their behest, the laity end up surrendering some significant part of their ministries - often ministries that they could do far more effectively and efficiently.

Most stipendiary clergy I know aren't terribly gifted in administration, yet much of the record keeping and (non-financial) reporting is done by the clergy.  Since it isn't our gift, we often procrastinate about it.  When we finally rouse ourselves, we take longer to do it than a more gifted person would have taken.  And to top it off, we don't do it particularly well.  The whole dynamic is problematical for the parish and the diocese and possibly soul damaging for the priest.

The end of Christendom over the past generation or so has added to the strain of existing institutions.  Demographic trends seem to offer little hope.  The shoots of vitality we sometimes call the Emerging Church seem to eschew the self-absorbed demands of institutional busywork.
Perhaps God is trying to remind us that:


Christianity is not an institution, but a principle of life.


All this led me to think a little more about the Anglican Covenant.  Badly wounded by its defeat in the diocesan synods of the Church of England, it is far from a dead letter.  Yet it represents, I think, precisely the kind of institutional and Christendom thinking the Church needs to shed if it is to survive, let alone thrive.

There is a Saturday Night Live sketch with Christopher Walken and Will Farrell which purports to be about the recording of the song Don't Fear the Reaper by Blue Öyster Cult.  Throughout the sketch, Walken (as the producer) keeps asking for "more cowbell," which Will Farrell enthusiastically provides.  The sketch ranks as the number five Most Memorable Moment in SNL history, and the phrase "more cowbell" has entered common parlance to describe something generally useless that is being advocated for some incomprehensible reason.