Some Odds and Ends 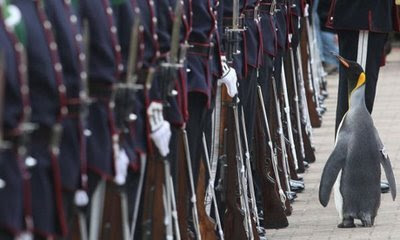 1. I have mentioned my . . . er . . . affinity for penguins before. Following on that theme, Mad Priest provides a link to this wonderful story from Norway via the Guardian. It seems that Nils Olav, a penguin at the Edinburgh Zoo, is the Honourary Colonel in Chief of the Royal Guards Regiment of the Royal Norwegian Army. Last week, he reviewed his regiment, and was knighted by King Harald. Knighthoods for penguins. I heartily approve.
2. During Lambeth, Times of London Religion Editor Ruth Gledhill blogged about many things - including a very provocative post about the prospects of an Anglican Holy Office. Holy Office, of course, is one of the historical names for the Roman Catholic agency now known as the Sacred Congregation for the Doctrine of the Faith, and also once known as the Inquisition. Many people - and not just me - have expressed concern that the current machinations around the Anglican Covenant and the Windsor Continuation Group amount to little more than the establishment of an Anglican Inquisition.
British comedian Eddie Izzard explains why an Anglican Inquisition is a contradiction in terms.


3. Nasty little reappraiser that I am, I have never actually advocated that the Anglican Church of Canada start solemnizing same sex marriages. I have, both here and elsewhere, defended the Canadian government`s decision to make such marriages legal. But I've stopped short of advocating for this particular change in Anglican practice. My contribution to the Anglican blogwars on this issue have been principally focussed on the propriety of the Church discerning that God may be leading us in a new direction.
All that said, here is a thought-provoking television commercial from California, where the religious right are busily trying to overturn the California court decision to permit same sex marriages. I don`t claim this makes the theological case at all. It doesn't. But it makes the secular case for civil law quite effectively.

Olav is the name of the penguin, after the late King Olaf 5 who died in 1991, probably.

Harald 5 is the name of the present King.

Thanks for the correction. You'd think an amateur royal watcher would get such a thing straight.

Malcolm, the commercial is excellent. I hope it works.

My reservation is about process, not direction. At the end of the day, the decision about whether or not to bless same sex unions (or, to be more honest about it, to solemnize same sex marriages) and the decision to ordain partnered gays and lesbians needs to be a synodical decision, and the onus is on those proposing the innovation to make the case for it.

To a great extent, we have skipped the synodical process and skimped on making the case. Indeed, with the exception of certain dioceses in Canada regarding blessings, the entire synodical process has been sidestepped. From a process perspective, this really isn't the right way to proceed.

In the case of New Westminster and the other Canadian dioceses, there is also a technical question as to whether the decision to proceed with same sex blessings was within the competence of a diocesan synod - particularly since General Synod has now made a deliberate decision not to proceed to same sex blessings at this time. But that is a separate question.

So, it isn't that I stand opposed on either score. For me, it is an issue of process.

Notionally, this also provides some time for the Holy Spirit to let us know if we've got the wrong end of the stick. While I don't think we do, I differ from our worthy opponents in admitting that I don't know the mind of God with certainty.

I know that you are a relatively recent Episcopalian, so I don't know if you are aware of the case of the so-called Philadelphia 11 - 11 women ordained in the Episcopal Church prior to the formal decision to ordain women. Subsequently, those ordinations were deemed irregular - although I don't know what process of regularization occured.

I'd argue that (with the possible exception of the blessings in New Westminster), those blessings and ordinations we've done to this point are similarly irregular.

At its worst, the ever-so discrete blessings of same sex unions, occuring without synodical approval and with nods and winks from diocesan bishops are uncatholic freelancing just as surely as the episcopi vagantes wandering around pretending to be under the jurisdiction of foreign prelates.

I'm quite convinced that the legitimate North American provinces will formally approve the blessing of same sex unions (or, more honestly, the solemnization of same sex marriages) at some point in the next ten years. Once that happens, I'll happily preside at such. Until then, I won't.

It's a process issue.

Does that make any sense?

Malcolm, it makes sense. Actually, I believe that you are correct that the process should be done properly. The priests who do the blessings act out of pastoral concerns, and I understand their side, too.

My wish is for the church to get out of the marriage business altogether. The priest doesn't marry the couple. The couple marry each other. Leave the legalization of the couple's union to the civil authorities, and then, perhaps after a waiting period, The church community discerns that the commitment is true, and a church blessing of the union can follow.