The end of authentic Anglicanism 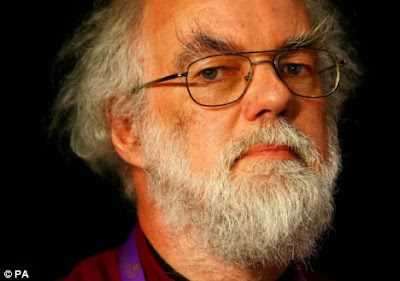 The Archbishop of Canterbury has taken the first steps towards the formal establishment of an Anglican papacy.

It started with the issuing of a load of papal bull on Pentecost, in which His Wholiness indicated his intention to start meting out punishments he has no power to mete out.

He would, he declared, start taking steps to punish those Anglican provinces which had "formally" taken any action which did not conform the the Windsor Report. Williams appears to have missed the salient fact (as set forth by the former Primate of Central America) that the Windsor Report is (not to put too fine a point on it), merely a report and not a piece of legislation, nor a bit of Holy Writ handed down from Sinai. And he justified his coup de eglise by referring to the so called Anglican Covenant that has yet to be adopted by a single province of the Communion.

The nice American banker lady on the left here responded to the Lambeth power grab by issuing a pastoral letter of her own which amounted to a very Anglican "get stuffed." Presiding Bishop Jefferts Schori drew on a series of historical examples to affirm the historic Anglican tradition of autocephalous provinces as against Williams's power-mad vision of an international Anglican Church subservient to the Throne of Augustine.

(As an interesting sidelight, the Anglican extreme right have latched on to a single 34 word sentence in the Presiding Bishop's letter to launch a revisionist propaganda campaign claiming that the first American Bishop had really meant for the American Church to be subordinate to Canterbury. In this thread from Thinking Anglicans, you will find a certain professor from an academic institution I usually refer to as "the place across the street" using far more than one sentence and well over 34 words to spin a completely false account of the history of the Episcopal Church. I grieve for the falling academic standards of that school on the south side of Hoskin Avenue.)

Pope Rowan responded by dispatching Kenneth Kearon of the Anglican Communion Office (the Ratzinger to Williams's Wojtyla) to issue the instruction removing all American representation from an assortment of Anglican Communion committees and commissions.

The Americans are being punished because two bishops of that Church (the Bishop of New Hampshire and one of the Suffragan Bishops of Los Angeles) are in partnered relationships with people of the same sex.

Now, in his initial bull, Pope Rowan indicated that he would also proceed against other provinces deemed to have violated the Windsor Moratoria (no gay bishops, no blessing same sex unions, no setting up parallel churches in somebody else's territory).

It's only the gay cooties moratoria that are deemed worthy of sanction. the border crossers are largely left alone.

Kearon's missive indicates that all of the American representatives on a range of committees are dismissed as members (but "allowed" to continue as "consultants"). He can't really proceed against us Canadians because the Anglican Church of Canada has taken no formal action, despite the actions of a few dioceses. Instead, he's going to send us a letter asking us if we've done anything that can give him an excuse to use his jackboots.

And what about the border crossers? What about Rwanda? Nigeria? Kenya? Uganda? Southern Cone of America?

Well, despite the FACT that all of the invading provinces are caught out dead to rights, most of them are let off scot free. Only Venables, Presiding Bishop of the Southern Cone of America, will receive a pretty letter asking him if he's been a good boy. And doubtless his answer will be taken at face value by the Lambeth junta.

Let's be clear, all of those listed provinces are actively engaged in violations of the Windsor moratorium on border crossing. The Anglican Church of Nigeria has a congregation that meets just down the street from my parish church - and some 10,000 kilometres from Nigeria. Yet Pope Rowan chooses not to notice.

As it happens, the Canadian Church is holding its General Synod this very week. In his Presidential Address, Primate Fred Hiltz, addressed the issues of the Covenant.

One is left wondering if provinces whose Primates continue to interfere in the internal life of other provinces and extend their pastoral jurisdiction through cross-border interventions will be contacted. To date I have seen no real measure to address that concern within the Communion. I maintain and have publicly declared my belief that those interventions have created more havoc in the Church, resulting in schism, than any honest and transparent theological dialogue on issues of sexuality through due synodical process in dioceses and in the General Synod.

I also wonder when I see the word “formally” italicized in the Archbishop’s letter. It leaves me wondering about places where the moratoria on the blessing of same sex unions is in fact ignored. The blessings happen but not “formally”.

As you will have detected I have some significant concerns about imposing discipline consistent with provisions in the Covenant before it is even adopted; and about consistency in the exercise of discipline throughout one Communion.

Quite precient of our Primate, don't you think? Days before Kearon's letter, Fred had already predicted that the squatters, sheep stealers and embezzlers would be given a free pass - and so they were.

But you have to love Fred's other question. Why is it that the North Americans are to be hounded and harried over their all too tolerant treatment of LGBTQs when the Province which annually blesses more same sex unions than all others combined (that is to say, Pope Rowan, your own Church of England) will be left quite alone? He calls on Rowan to admit that the North Americans' real sin is not our more tolerant attitude towards LGBTQs, but rather that we aren't prepared to lie about it like he is.

Like many, I had high hopes when Rowan Williams was named to succeed the conniving George Carey. Little did we know.

I'm almost past caring. If Pope Rowan wants a new-fangled, curial Anglicanism, aping the worst excesses of Rome and bending the knee to the most hateful homophobes around, then he's welcome to it.

That's the sad thing. Many of us are.
I suspect that's why the bullies will win.

What intrigues me in all this is the total lack of interest of the media. When SEX was the topic at GS 2007, we has reporters crawling out of every nook and cranny in Winnipeg, yet this little party in Halifax is completely ignored. I have seen virtually zero coverage of all this unpleasantness with Rowan, even though young Canon Kieran ( a smoother talker I have never met) was square in the midst of the Halifax proceedings when Rowans wrist slapping was announced. Even one of ANIC's spinning best bloggers can't draw more than a comment or two posting on Holy Post at the National Post. And what of the media corp in jolly England, hardly a whisper about all this. Is it really a non-event?

Erika I am past caring. This is just plain crazy.

Your Grace:
What seems to missed by both sides is that Cantur did not choose sides but slapped ACoC, TEC, the Southern Cone and provinces in Africa.
The Church in Canada says we have not done nothing but allows New West, Niagara, and Ottawa to do their own thing. At best this is congregationalism. If you violated standing orders (read canons) you would be hauled up before the old man. Here we just sit on on hands.

The Canadian Church has been asked to clarify something. Now, while agree with you that it is bizarre to pretend Canada is innocent when New Westminster and Niagara have acted, it is Cantuar that set the standard. Neither General Synod nor the House of Bishops has taken any action that violates any of the moratoria. Thus, by the standard that Pope Rowan has set, he has no grounds to act against Canada.

He has similarly asked Souther Cone for clarifications. If Southern Cone responds with the truth (which I rather doubt), then he will be obliged to sanction them as well.

But there was no action AT ALL taken against teh African thieves and embezzlers. Nigeria, Kenya, Uganda and the first of the border crossers in Rwanda are not even mentioned.

I suggest, Sigh, that you go and review the source documents.

Actually, I don't believe that Niagara has acted yet. Certainly they passed the motion but +Michael said that he would wait until after Synod 2010.

What will come out of today is anyone's guess. There is a growing frustration with the status quo, but is the Canadian church ready to stand up and speak out openly and honestly about where we stand? I honestly don't know. I think a number of the laity and clergy are. I doubt that the bishops are. It will tense in sessions today as we will deal with the report given last night and with the Anglican Covenant.

The liturgy for the blessing of same-gender unions in the Diocese of Niagara was published with +Michael's approval some time ago and is available on the diocesan website. It was his predecessor +Ralph who withheld (or at least delayed) "pontifical assent" from a similar motion.

Mea culpa but now having read both Cantur missive and Schori's reply I am struck by her suggestion that maybe not all have heard the same message and the TEC may be wrong.
Like in hockey the instigator of a fight receives the harsher penalty.
Talking about curia - I would suggest that the amended section 4 of the Convent be reread.