Projection: "the operation of expelling feelings or wishes the individual finds wholly unacceptable . . .by attributing them to another" 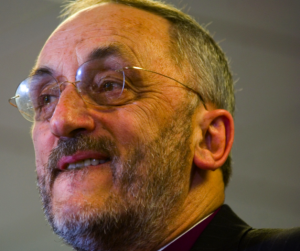 Martyn Minns has fallen prey to an assumption common to many far right extremists. He assumes that his ecclesiastical opponents are as devoid of decency and morality as he is.

The schismatic bishop has recently accused the Episcopal Church of using Episcopal World Relief and other international mission funding to bribe African Anglicans "to embrace the TEC viewpoint."

Now, as a rule, I refuse to link to extremist websites, so instead I'll link you to Canon Mark Harris's Preludium blog, where he provides the entire delusional Minns quote, along with some helpful hermeneutic.

The thing is, I don't think Minns is actually lying. Technically, a liar must know that what s/he is saying is untrue. But I think the delusional Dr. Minns actually believes that the Episcopal Church would bribe African church leaders. After all, his gang have already done so.

Jim Naughton, formerly on staff with the Diocese of Washington, has fully documented the way that far right activists in the United States have used financial clout in precisely this sort of dishonest way as part of their campaign to marginalize the Episcopal Church.

It's classical projection, of course. Minns and his fellow travellers are prepared to buy the support of African bishops like Peter Akinola and Henry "all that money" Orombi. Minns has some residual moral understanding that bribery (if not simony) is wrong. Therefore, instead of being accountable for the misconduct of his far right allies, he projects his guilt at the object of his hatred, the Episcopal Church.

Because the Episcopal Church, through Episcopal World Relief and other mission and partnership programs, provides financial aid to assorted African dioceses, Minns delusionally claims that any TEC dollars destined for Africa are part of a scheme to bribe people. Rather like the philanderer who suspects his chaste wife of infidelity, really.

The Episcopal Church is the single wealthiest Province of the Anglican Communion, so it isn't surprising that TEC provides resources to any and all other Provinces who are prepared to accept it. (In actions which vaguely resemble integrity, both Nigeria and Uganda refuse to accept money from the American Church.) Despite Minns ravings, there is no evidence at all to suggest that TEC has ever made a single dollar of their financial aid dependent on the recipients "embracing the TEC viewpoint." But then, Minns has never let truth get in the way of his race-baiting, gay-baiting propaganda campaign.

In the delusional mind of Martyn Minns, if the Episcopal Church sends any support to other parts of the Communion, it amounts to bribery.

Of course, if TEC were to stop sending money to other Provinces of the Communion, Minns and his hatemongering allies would condemn them for that as well. So long as we are dealing with the delusional paranoia of the Anglican far right, anything TEC does or doesn't do will be twisted and deformed to be "evidence" of their perfidy. It's the CANA / ACNA / GAFCON version of "does the Honourable Member still beat his wife?"

It now becomes increasingly clear why Minns was consistently unsuccessful in four attempts to become a bishop in the Episcopal Church.

Picture taken from www.wowowow.com
Posted by Malcolm+ at 8:07 PM

The following excerpt from the CANA Convention and commentary from Fathe ake are enlightening:

The IRD promotes social witness? Unbelievable. For those who may have forgotten, the IRD used to be a group of radical anti-communists during the Reagan era. When their fanatacism lead to the death of some innocent missionaries in Central America, they recast their image, with their new target being "progressive" (in their mind, "Marxist") leaders in the mainline Christian denominations. They were still able to draw funds from the same small pool of extreme right backers that supported their anti-communist rhetoric. What brought them to light for most Anglicans was their significant role in the creation of the American Anglican Council, which became the Network, which became ACNA. So why are they present at this Council? Because, when it comes to the schismatic Virginia parishes, the IRD has always been around, usually lurking in the shadows. Consider this quote from a 2006 entry on the Casandra Pages:


...The announcement about the Virginia parishes has been directed by the skillful spokespeople at the Institute for Religion and Democracy (IRD), a neo-conservative Washington think-tank that has innumerable connections, through its board of directors and officers, to the conservative Washington area parishes that have recently left the Episcopal Church. These parishes have been home to prominent conservatives such as Oliver North and Supreme Court Justice Clarence Thomas, as well as top-level IRD Episcopalians. For instance, Fox News commentator Fred Barnes is a member of the Falls Church congregation, and serves on the Board of the IRD; Fox has covered this story extensively and sympathetically, interviewing Barnes as part of a roundtable discussion, but never mentioning his IRD connection

This projection is transparent!