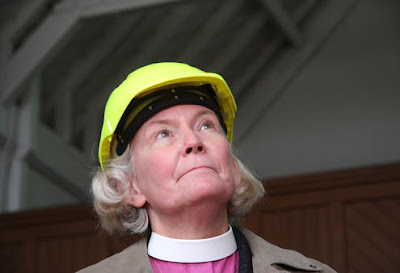 The Bishop of Christchurch happens to be a Canadian. Victoria Matthews is the former Bishop of Edmonton. And. longer ago than either of us would likely care to admit, she was doing an advanced degree at Trinity College while I was doing my MDiv. (I recall one of those ever so serious discussions about what we should call female priests - and Victoria's startling assertion that we should call them "Father" as well. I once heard someone refer to her as Vicky. Somehow, I can't imagine her answering.)

There were a number of interesting articles about the role Victoria played in the aftermath of the earthquake. For some time, she slept on the floor of her study, since ther rest of her house wasn't deemed safe. She held crisis team meetings in that study each morning - presumably after rolling up the matress. There were issues of communications, since office emails were in an unsafe building. There were concerns about diocesan payroll being paid out on time. She directed that all diocesan clergy were to wear their collars - whatever their usual practice - so that they might be recognized and approached by people still in distress. 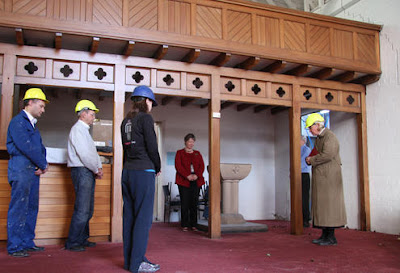 One of the most striking images was of Victoria presiding at the impromptu deconsecration of a chapel. The engineers had declared the structure unsound and in danger of imminent collapse - with the possibility that it could damage the seniors home next door. Here we see +Victoria Christchurch - not in cope and mitre, but in raincoat and hardhat - pronouncing the deconsecration moments after the engineer had given his verdict.

I emailed Victoria - as one does. She was obviously busy, so the delay in her reply is entirely understandable. The content proclaims a gospel message with startling clarity.

Today, as an act of thanksgiving that there was no loss of life, Victoria has asked her diocese to raise $100,000 (NZ$, I presume, so about C$75,000 or US$73,000) for Haiti, where the earthquake last January caused far greater devastation, including substantial loss of life.

It is very easy, in the midst of our own crises great or small, to maintain a proper perspective, to look beyond one's own devastation to see the greater devastation of another.

I close with Victoria's closing words from her email:

It is important to give thanks
in a way that will change lives.
.
.
.
.
All pictures are from the Anglican Church in Aoteoroa, New Zealand and Polynesia website.
Posted by Malcolm+ at 8:59 PM

Nicely written, Malcolm. +Victoria has always been a most profound Spiritual leader. New Zealand is blessed by her presence.