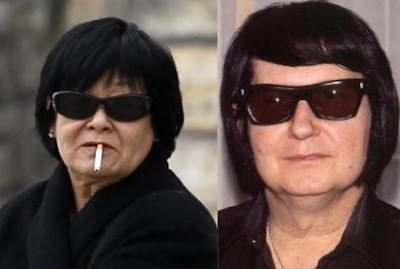 So Canadian Minister of State for International Cooperation Roy Orbison . . . er . . . Bev Oda didn't want to approve continued funding for KAIROS, a Canadian ecumenical group that does development work around the world.
.
Oh well. She's the Minister and I'm not. She gets to decide that. I don't. Such is politics.
.
Like many people, I think the decision is boneheaded - and appears to be based on nothing but the Harper Conservatives' bizarre belief that anyone who doesn't hate Palestinians is an anti-Semite. (Seriously - the 42 Year Old Vigin Jason Kenney is quite free with accusations of anti-Semitism, and sometimes even directs them against Jews.)
.
The Conservatives are the government - and thanks to a coalition with Count Ignatieff and the Liberals - they have managed to retain the confidence of the House of Commons for more than five years. As a result, they get to decide which organizations will receive government funding and which ones will not.
.
If they want to base their decisions on delusional fantasies about anti-Semitism, they get to do that.
.
But here is the problem. In doing what she had every right to do, Bev Oda lied.
.
The Sir Humphreys who staff the Canadian International Development Agency were of a mind to continue the CIDA financial support that KAIROS had been receiving for almost 40 years. They prepared a document for the Minister in which they recommended the extension of the grant for another four years.
.
Now, I've worked in government bureaucracy. It is not at all uncommon for Ministers to decide that they will not take the advice of their officials. It is right and proper, at the end of the day, that the decisions are made by the people who have a Parliamentary mandate to make those decisions and who will be politically accountable for those decisions.
.
Despite Stephen Harper's bluster and misdirection, no one has disputed Bev Oda's right to suspend the funding - or, more accurately, to reject the proposal to continue funding.
.
If Bev Oda had the competence God gave a particularly stupid goldfish, she would have sent the documents back to the officials unsigned. She would have informed them that she was not going to approve the funding, and that would have been that. Alternatively, she could have instructed them to prepare another version of the document with an "I do / do not approve" option.
.
Either way, she had the means to reject the funding application without looking like Roy Orbison's stupider sibling.
.
Instead, Bev Oda inserted the word "not," in ink, into the wording of the recommendation above the signatures of the senior CIDA officials. She tried to create the false impression that the officials had recommended exactly the opposite of what they had recommended.
.
In other words, Bev Oda lied.
.
Not only that, she lied incompetently.
.
But most of all, she lied unnecessarily.
.
So for me, it isn't the dishonesty that's shocking. I've known politicians to be dishonest before. Heck, in the great scheme of political dishonesty, this isn't even a big one.
.
No. For me it's the stupidity.
.
Lying when you're caught out at something is, if not admirable, at least understandable.
.
Lying for no reason at all is simply inexcuseable.
.
In fact, it's just plain dumb.
.
Bev Oda may not be thrown under the bus immediately - but you can rest assured that her political advancement in the Harper heirarchy is done like dinner. She's an embarrassment - and Harper doesn't like to be embarrassed.
.
When her political obituary is written within the next year or so, people will blame her demise on the fact that she lied to Parliament and to the people of Canada.
.
The reality, though, is that she torpedoed her own political career because she is mind-numbingly stupid. The lie is merely a symbol of her incredible incompetence.
Posted by Malcolm+ at 10:58 PM

Setting aside the general vitriol and lack of charity in your article. I just find it surprising that a priest would make fun of a single man for living a celibate life.

I suppose I could be more charitable about Mrs. Oda telling lies when she didn't have to. But any reasonable person can see that it was boneheadedly stupid.

As to Mr. Kenney - it's not a bad thing that he's a 42 year old version. It's just oddd that he's the one who made an issue of it. Most politicians don't feel the need to discuss their sex lives in public.