Encounter with a Saint

Have you ever met a saint?

I've actually met a saint.  In the flesh.

Of course, the Christian Church has used the term "saint" in a number of different ways over the years, and popular culture has added a few more interpretations as well.

In the early Church, the term "saint" included every believer.  Eventually the Church took to designating (usually after death) those of the saints whose lives had demonstrated particular sanctity, and over time the term "saint" was applied to those people.  At first, this designation was based on popular acclamation, often accompanied by claims of miracles.  By the middle ages, the Church found it necessarily to establish a process to discern which of the departed were actually entitled to be recognized as saints.

With the English Reformation, the Church of England moved away from the cult of saints.  Some would argue that Anglicans have no process to canonize saints since then - and certainly there is no process to parallel that of our Roman brothers and sisters.

Yet when the Church of England added to the ecclesiastical calendar a remembrance of King Charles I and the anniversary of his execution, it would be very hard to say that they did not, thereby, canonize him.  Indeed, in places about the Communion there have been parish churches dedicated to St. Charles, King and Martyr.

Since then, many Provinces of the Anglican Communion have added other names to their liturgical calendars.  While we have not generally taken to calling such folk "Saint Samuel Seabury" or "Saint Charles Inglis," we have allowed for them to be commemorated in the liturgies of the Church in a manner consistent with the practice of a much earlier time.

The usual practice in Church history has been to comemorate saints on the anniversary of their deaths.  Certainly this made sense with the martyrs, but it was the fairly consistent practice in the vast majority of cases for all saints, martyrs or not.

When Florence Li Tim-Oi was added to the calendar of the Anglican Church of Canada, we followed this ancient practice, establishing her commemoration on February 26.  By contrast, our brothers and sisters in the Episcopal Church appointed January 24, the anniversary of her barrier-breaking ordination as a priest in the Diocese of Hong Kong in 1944.  Were it not for the timely blogging of my friends Jim and Elizabeth, I'd've missed this anniversary entirely.

The Canadian resource For All the Saints tells the story of Florence Li Tim-Oi.  Here is the essential bit:


[Li] was made deacon in 1941, and was given charge of the Anglican congregation in the Portuguese colony of Macao, thronged with refugees from war-torn China. When a priest could no longer travel from Japanese-occupied territory to preside for her at the eucharist, the Bishop of Hong Kong asked her to meet him in Free China, where on January 25, 1944 he ordained her “a priest in the Church of God.”

To defuse controversy, in 1946 she surrendered her priest’s license, but not her Holy Orders, the knowledge of which carried her through Maoist persecution. For the next 39 years, she served faithfully under very difficult circumstances, particularly after the Communists took over mainland China.

In 1983, arrangements were made for her to come to Canada, where she was appointed as an honorary assistant at St. John’s Chinese congregation and St.Matthew’s parish in Toronto. The Anglican Church of Canada had by this time approved the ordination of women to the priesthood, and in 1984, the 40th anniversary of her ordination, Ms. Li was, with great joy and thanksgiving, reinstated as a priest. This event was celebrated not only in Canada but also at Westminster Abbey and at Sheffield in England, even though the Church of England had not yet approved the ordination of women.

From that date until her death in 1992, she exercised her priesthood with such faithfulness and quiet dignity that she won tremendous respect for herself and increasing support for other women seeking ordination.


When I was a divinity student at Trinity College, Toronto, Florence Li Tim-Oi would frequently attend weekday services in the chapel.  She didn't usually wear clericals, and nobody seemed to make any sort of fuss over her.  As far as I knew, she was just this nice little old Chinese lady who came to chapel sometimes.  For the longest time, I had no idea that this tiny woman had lived out so heroic a witness to the power of the Gospel.

But isn't that really what makes the heroic sanctity of the saints so very special? They don't necessarily look heroic. As God said to Samuel as he inspected the sons of Jesse:

Do not look on his appearance or on the height of his stature, because I have rejected him; for the Lorddoes not see as mortals see; they look on the outward appearance, but the Lord looks on the heart.

Clearly, God saw in Florence Li-Tim-Oi a mighty heart, able to witness to his grace in the midst of great difficulty. And it is my honour to have come to the altar with this great hero of the faith. 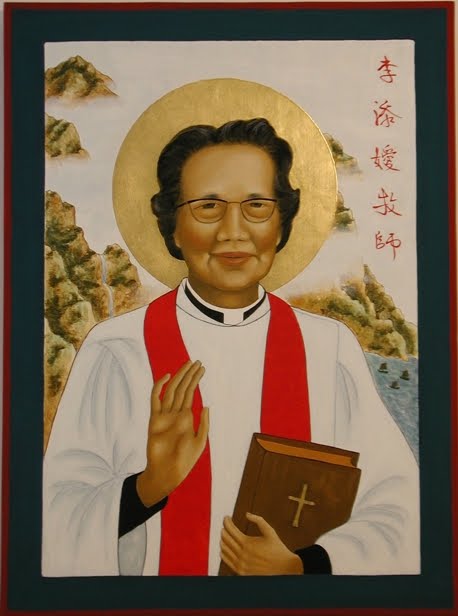 Loving God, giver of all good gifts,
fill us with your grace,
that we, like your servant Li Tim-Oi,
first woman to be ordained an Anglican priest,
may entrust you with our destiny.
May we, with her same forbearance in the face of adversity,
witness to you in all things;
through Jesus Christ,
who lives and reigns with you and the Holy Spirit,
one God, now and forever.
Amen.

Thanks Malcolm. Where did you find the icons?

Thank you, not only for the story of Florence Li, but for your summation of what it means to be saint.

While I did not meet Florence Li, I did meet a fellow priest in Lichfield Diocese, whose uncle ordained Florence! Met him at a deanery gathering in the late '80s,debating the ordination of women to the priesthood. He was obviously pro women's ordination.

Interestingly, as the only women priest at the debate, I was not allowed to speak! Instead had to listen while a "little snake" of an English priest lied as he told of the "terrible troubles being experienced in Canada because of women's ordination!
Blessings!

Ann, the first two were on the Li Tim-Oi website (litim-oi.org) and the last was found doing a google image search.