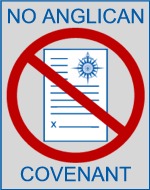 The Anglican Covenant is gradually working its way through the processes of the Church of England.  A little more than a year ago, the General Synod directed that the Covenant be sent to the dioceses as the next step in the approval process.  In order to return to the General Synod for final approval, the Covenant must be passed by a majority of the 44 dioceses.

This does give one small advantage to the No Anglican Covenant Coalition and our allies.  In order to proceed to the next steps, the Covenanters need to win in 23 dioceses.  But in order to prevent them from winning in 23, Covenant opponents only need to win in 22.  Of course, this smal tactical advantage is more than offset by the strategic advantages held by Lambeth Palace and Church House, particularly in terms of communication.

And there was an interesting pattern noted.  In the four dioceses where members of synod recived balanced background materials (that is to say both materials in favour and against), the Covenant was defeated.  It was only in dioceses where the debate was heavily rigged that the Covenanters were able to get it through.

Today, however, there was definite movement.  The first news come from the Diocese of Derby, where the Covenant wasn't so much defeated as it was utterly trounced.  With only one person apparently prepared to speak in favour, the Covenant when down with a thud, defeated in all houses by wide margins: 0-1 among the bishops, 1-21-2 among the clergy and 2-24-1 among the clergy.

Then came word that the Diocese of Gloucester had also defeated the Covenant - though as yet no voting tallies have been released.  The day just kept getting better.

So the score now stands at four yes and six no.  The Covenanters need 19 more wins, while the Covenant's opponents need only 16 to stop it.

This came on the heels of the apointment of a third Patron for the No Anglican Covenant Coalition, with Oxford University Professor Diarmaid MacCulloch joining retired bishops Peter Selby and John Saxbee who were appointed last year.  (And stand by for another announcement in the coming days.)

The arc of the moral universe is long indeed.
Posted by Malcolm+ at 1:35 AM

Is Diarmaid MacCulloch still a Christian? I thought he'd moved away from Christian faith (and I fancy I've read statements by him to that effect in the introductions to at least one of his books).

A superb writer, of course (and I've enjoyed several of his books, especially the Cranmer one).