The Hazards of Swimming the Tiber

Among Anglicans, particularly Anglicans of a particular type, it is not uncommon to find periodic outbursts of Roman Fever. Given our high view of the importance of catholicity, it is not that unusual that some should pursue catholicity by moving to the institution which claims that it alone possesses such catholicity. 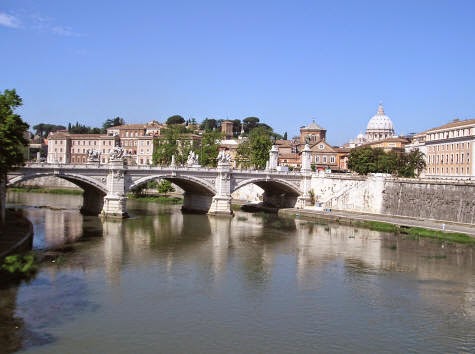 Conversions to Roman Catholicism happen from time to time. Most often these are driven by pastoral considerations such as an Anglican spouse choosing to worship with their partner. I recall a retired Anglican priest who converted, not out of any theological conviction particularly, but because his children had both married and then become Roman Catholics and he wanted to worship with them and with his grandchildren. Sometimes conversions are driven by a calmly reached theological conviction, though conversions in anger due to some development in Anglicanism seem more common.

There is a tale of a certain priest in Toronto who left a note in the sacristy after the early service saying simply:

One retired Episcopal bishop made the trip to Rome only to return a few years later. He then re-reconverted. Some sort of ecclesiastical Air Miles I guess.

In a bit of geographical humour, a conversion to Rome is sometimes called Swimming the Tiber. Although conversions the other way are at least equally common, neither Swimming the Thames nor Swimming the Channel seem to have developed the same currency.

I've never been particularly tempted by the glory that was or is Rome. Even during the period when I was out of active ministry and quite alienated from my own church, I clearly knew that Rome was not for me. There were too many issues - the way in which authority was exercised being not the least of them.

There was a minor earthquake on the fringes of the Anglican world this week when Greg Griffith, a major lay soldier in the Anglican culture wars of the past several years, announced on his blog that he and his family had been received into the Roman Catholic Church. In keeping with past practice, I do not link to toxic blogsites, so even though Greg's piece on his conversion is relatively eirenic - at least by the standards of that site - you'll have too Google Stand Firm (the site) and Waypoints (the article) for yourself.

It is a trifle risky to comment on someone else's spiritual journey. This is particularly true when the other person has been engaged on the other side of a shared conflict. I want to be clear that my goal here is not to take any shots at Greg Griffith, nor in any way to imply an attitude of "good riddance."

I do want to acknowledge that feeling alienated from your own religious body - whether the faith of your childhood or the faith of your choosing (both Greg and I were converts to Anglicanism) - is a profoundly disturbing experience. I've been there. I get it. It can be soul destroying. It is for many.

I disagree with Greg on just about every point under dispute in 21st century Anglicanism. I don't agree with his views and I have serious issues with the way he has argued those views, personalized issues and raised the temperature at every opportunity. But I am still saddened to see his walk away from the shared table.

In his apologia, however, Greg makes two points which I find odd coming from one who has just been received into the Roman Catholic Church.

First, there is his dismissive comment about Pope Francis. I get that Francis isn't the favourite of every Roman Catholic, especially those of a more conservative hue. But it nonetheless strikes me as passing strange that Greg feels the need to make dismissive comments about his new Pontiff, whom he describes as:

somewhere between a disappointment and a disaster.

Second, and more significant to me, is his stated intention to continue managing Stand Firm as a site for those still engaged in the Anglican wars. I've always been told that the most important part of leaving is to leave. Continuing to engage in Anglicanism's internal flamewars is rather like the departed partner in a broken marriage assiduously working to screw up the former spouse's subsequent relationships.

I hope Greg Griffith finds some peace in his choice to swim the Tiber. Unless he slips the hawsers mooring him alongside Anglicanism, his swim will be dangerous at the very least and he will be unlikely to make landfall on the other side.
Posted by Malcolm+ at 11:39 PM

Pope Francis may not be interested in his point of view...thus he doesn't want to give up his day rant.

So the chief proponent of "standing firm" instead floated away cross the Tiber---yet claims he can yet virtually Stand Firm! How incoherent. How Greg Griffith. But I repeat myself.

Vaya con Dios. Good luck on the "telling Pope Francis how to do his job" thing though...

I know a sizeable number of Anglican preachers' kids - those who have not abandoned Christianity altogether - who are now worshipping in evangelical churches. One of my daughters is among them; she now attends Central Baptist Church in Edmonton.