Today is the feast day of that judicious divine, Mr. Hooker. 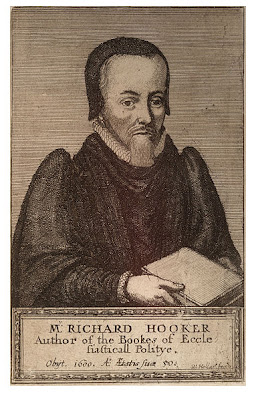 "He that goeth about to persuade a multitude that they are not so well governed as they ought to be, shall never want attentive and favourable hearers, because they know the manifold defects whereunto every kind of regiment is subject, but the secret lets and difficulties, which in public proceedings are innumerable and inevitable, they have not ordinary judgement to consider. And because such as reprove supposed disorders of state are taken for principal friends to the common benefit of all, and for men that carry singular freedom of mind, under this fair and plausible colour, whatsoever they utter passes for good and current. That which wanteth in the weight of their speech is supplied by the aptness of men's minds to accept and believe it."

- The Rev'd Dr. Richard Hooker
Of the Laws of Ecclesiastical Polity (I, 1, i)
.
When I was a young priest, I had, for a time, a retired Archbishop as my honourary assistant. On his death, his family kindly gave me his copy of Ecclesiastical Polity. I got more than the occasional odd look when I would mention that I now had the Archbishop's Hooker.
.
I suppose it was injudicious of me.
Posted by Malcolm+ at 4:25 PM