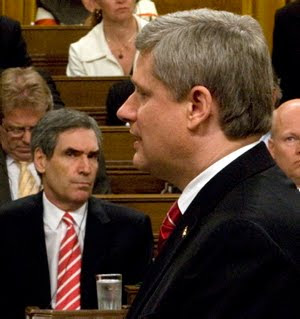 I must admit, at times Prime Minister Stephen Harper and his political instincts baffle me. I swear, the man has the political equivalent of Tourette's Syndrome.

Recently, the hot news story in Canada has been the accusations of a Canadian diplomat that Canadian troops had been handing prisoners over to the Afghan government without taking adequate measures to ensure that such prisoners were not tortured.

To their credit, the Harper government have actually taken some steps to address this problem. They may not have done enough, but they had done something.

Unlike the previous Liberal government, which (unlike most other NATO countries) had decided to leave Afghan nationals to the tender mercies of a government known to engage in the torture of prisoners. That would be the same Liberal Party now led by "regulated" torture advocate Michael Ignatieff.

The part I don't get is why the Conservatives have decided to get defensive on this file, and have started attacking the credibility of this diplomat. It was on the basis of his reports that the Harper government changed the terms under which prisoners were turned over - and on at least three occasions, suspended such turnovers in response to reports of torture and abuse.

The Tory record on this file may not be perfect, but in the words of a former Conservative Prime Minister from my home province, "don't compare me to perfection - compare me to the other guy."

Seems to me the smarter (and actually justifiable) response would have been for the Conservatives to say something like this:

"Yes, there was evidence that prisoners turned over to the Afghan authorities were being tortured. That is why our government changed the terms under which such prisoner transfers happened. We are prepared to further tighten our conditions if necessary. Unlike the former governing party and their current leader, we find torture to be abhorent."

In fact, had I been advising the Prime Minister, I'd have told him to appoint a well regarded Canadian whose reputation was above reproach - possibly former federal NDP leader Ed Broadbent or former Ontario NDP leader and UN Ambassador Stephen Lewis - to conduct a review and report back to the government in 90 days about how such prisoner transfers should be managed.

Instead, the Conservatives have become (in the eyes of most observers) defenders of the transfers and de facto defenders of torture.

And they've pretty much left Count Ignatieff and the Liberals off the hook.

People who don't understand that are either wicked or stupid (or possibly both).

For the egregiously dimwitted, here's a former professional wrestler to explain it to you.

I can't tell if he is a ranting lunatic or if he really has the ability to cut through the fog of politics and get at the real meat of an issue.