I don't believe in the Bible

I have no doubt the title will shock many. After all, isn't it a basic assumption that a Simple Massing Priest would believe in the Bible?

But the Christian faith is not about believing in the Bible.
.
Yes, at my ordination to the priesthood (and at my ordination to the diaconate some months previously), I did solemnly affirm "that I do believe the holy scriptures of the Old and New Testaments to be the word of God, and to contain all things necessary for salvation." I believe the holy scriptures. I don't believe IN the holy scriptures.
.
Belief IN the Bible turns it into an idol - and it calcifies God's revelation before it is complete. Thus, 500 years ago, Galileo was condemned for saying that the earth revolves around the sun - just as today some condemn Charles Darwin for saying that particular life forms developed through natural selection. For those who believe IN the Bible, science is a threat or an enemy.
.
The Bible is the narrative of God's loving relationship with his creation and with his creatures. The creation accounts in Genesis (and there are two different accounts) are not intended to be a science textbook about HOW God created the world, but a religious text about God's purpose in creating the world. Using scripture as a scientific text is as silly as using Origin of Species as a theology text.
So, what do I believe in? 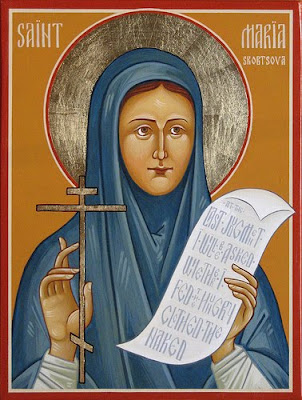 Let me tell you the story of Maria Skobtsova - or St. Maria of Paris and Ravensbruck as she is known to our Orthodox brothers and sisters.

Maria was a Russian noblewoman born a few years prior to the Russian Revolution. After fleeing Russia, she eventually settled in Paris, where she became an Orthodox nun and worked among the city's poor. When the Nazis occupied Paris, she and her companions began providing baptismal certificates to Jews hoping to avoid deportation.

Eventually, she and her companions were arrested. St. Maria ended up in the Ravensbruck concentration camp. On Holy Saturday, 1945 - just over a month before the end of the war - she took the place of a Jewish woman and was executed in the gas chamber.

She is also a very wise woman.

She once said: "We Orthodox do not place our faith in a book or in laws. We believe in a person."

"We believe in a person."

We believe in the person of Jesus Christ.

This Sunday's Gospel is about who Jesus Christ is. "You are my Son, the Beloved."

Jesus is not who or what people expected when they looked for a Messiah. They were expecting a military or political leader who would free them from Roman occupation. That's what the holy scripture had promised . . . they thought.

But that's not what they got.

Instead, they got a carpenter's son, an itinerant rabbi who told them that the Kingdom of God was already among them. They got a wanderer who seemed to question the religious authorities. They got a storyteller with obscure sayings.

Instead of being driven out, the Romans seized this unlikely liberator and executed him.

No, not what the people expected at all.

Every year, there are thousands of sermons preached and hundreds of books and articles written about how it will be when Christ returns. Some of them set out elaborate scenarios based on their own (often peculiar) interpretations of the Bible they believe in.

Authentic Christianity does not place its faith in a book, but in a person.

I believe in God, the Father almighty,
creator of heaven and earth.

I believe in Jesus Christ, his only Son, our Lord.
He was conceived by the power of the Holy Spirit
and born of the Virgin Mary.
He suffered under Pontius Pilate,
was crucified, died and was buried.
He descended to the dead.
On the third day he rose again.
He ascended into heaven,
and is seated at the right hand of the Father.
He will come again to judge the living and the dead.

I believe in the Holy Spirit,
the holy catholic Church,
the communion of saints,
the forgiveness of sins,
the resurrection of the body,
and the life everlasting.

You are obviously Orthodox - so why oh why are you somewhere else?

I certainly feel great affinity for Orthodoxy, and especially Orthodox spirituality. But I respect my Orthodox sisters and brothers to much to pretend that those areas where I do not agree - issues like the ordination of women, for example - are mere quibbles.

Blessings to you, Father Michael.

So you support women's ordination? I have never understood that myself. For one, why women should be ordained, and then, why women would push for ordination. I do believe in equality. Men and women are equal, but they are not by any means the same. How would I, as a married woman, be a priest and be a shepherd over my own husband? In marriage, he is to represent Christ and I the Church. Even if I could reason beyond this- which I cannot- I still wouldn't WANT to be ordained. I have enough responsibilities looking after my own family. Besides, the Russians have a saying, "The priest is the head, but the matushka is the neck!"

Well, one could rehash the issue of women's ordination until the cows come home. Among Angllicans in North America it is pretty much a settled question - and that based to a very large extent on the experience of women's ministry over the past 30+ years.

I actually had the pleasure of knowing the first woman to be ordained an Anglican priest. Florence Li Tim-Oi had been ordained by the Bishop of Hong Kong and South China during the war when he had been unable to find a priest who was willing to go back and forth across the Japanese lines to minister to people on both sides. You can find her story at: http://www.litim-oi.org/

She had retired in Toronto. When I was at college, I thought she was just this nice little old lady who came to chapel. Well, she was a nice little old lady, but for the longest time, I had no idea of her historical significance. Li Tim-Oi is remembered in the calendars of several Anglican provinces on February 26.