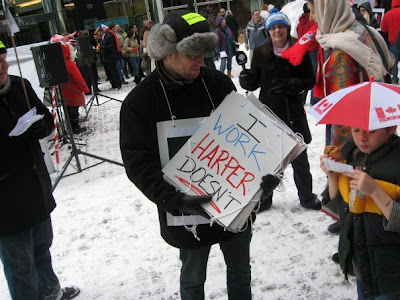 On this mild but relatively humid Regina day, a number of concerned Canadians turned up in Regina to protest Stephen Harper's abuse of Parliament and of democracy. Organizers estimated the crowd at 500 - CBC says 200 - I'd call it about 350. I haven't seen a national attendance estimate for all the 60+ rallies across the country, but it given the Globe and Mail estimate of 3,000 in Toronto, it will be certainly in the tens of thousands - possibly more than 100,000. That's on a Saturday afternoon - which is a work day for an awful lot of folk from that generation most inclined to protest.

Let me be clear about something off the top. Proroguing Parliament per se is perfectly legitimate. There was a time, in fact, when the Canadian Parliament was prorogued annually and came back a few weeks or months later with a new session and a new Throne Speech. There's nothing wrong with that.

Normally prorogation happens when a government's legislative agenda is mostly completed. This is important because any government bill still on the order paper at the time of prorogation automatically dies. If the government still wants to pass the bill, it has to be reintroduced and go through the entire three reading process again. (Private member's bills, by contrast, resume at the point they had reached at prorogation, provided it is the same Parliament and there hasn't been an election.) 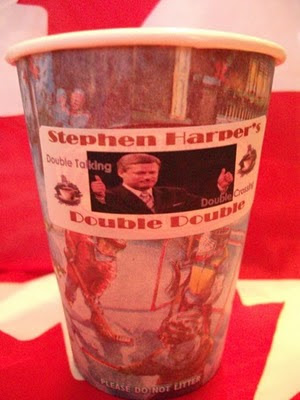 And not for the first time. Many of those same bills died when Parliament was dissolved to call the 2008 general election (in violation of his own fixed election date law), and then died again when prorogation saved his sorry political backside when Parliament was about to vote non confidence in his government. I trust that Harper Conservative bills, like cats, have nine lives.

Only four times in Canadian history has a Prime Minister advised the Governor General to prorogue Parliament solely in order for the Prime Minister to avoid being accountable to the House of Commons. All four cases are demonstrations of corruption, cowardice and contempt for Parliament. (My old friend Ralph Goodale said at the rally that it had happened three times. Doubtless he wanted to skim over Jean Chretien's cowardly abuse of Parliament.)

* In 1873, Sir John A. Macdonald wanted to avoid a non-confidence motion related to the Pacific Scandal, where the Conservative Party had received illegal kickbacks from contractors building the national railroad.

* In 2003, Jean Chretien wanted to avoid having to deal with the fallout of the Sponsorship Scandal, in which the Liberal Party was the beneficiary of a criminal conspiracy involving government sponsorship contracts, particularly in Quebec.

* In 2009, Stephen Harper wanted to avoid a non confidence motion which would have resulted in the defeat of his government in a circumstance where the Governor General would most likely not have accepted his advice to call an election, thus leading to a Liberal - NDP coalition government.

* In 2010, Stephen Harper wanted to avoid answering questions about the abuse of Afghan prisoners who had been turned over by Canadian troops to the Afghan police and military. (As I've blogged previously, if Stephen Harper really were the brilliant strategist the national media and his mother believe him to be, he could easily have used that issue to enhance his own reputation and to trash the Liberals. The confluence of events suggests to me that Stephen Harper may be stupid as well as cowardly.)

Much of the political history of Great Britain from 1200 to the 1800s was about securing Parliament as a bulwark against the arbitrary exercise of executive power by absolutist monarchs. As the late godfather of Canadian political scholarship, Eugene Forsey, wrote more than 65 years ago:

Or, as another political thinker from central Canada remarked more recently:

When a government starts trying to cancel dissent or avoid dissent is frankly when it's rapidly losing its moral authority to govern.
Stephen Harper, 2005

Stephen Harper. He was right. Then.
Posted by Malcolm+ at 7:51 PM

I wish I understood Canadian government (and parliamentary government in general) better - it seems like a much more sensible system than the one we have.

I rather think it is, but, as you see, a good system may be no match for a bad leader.

There are two principle differences between our mode of governance and yours.

1. The functions of Head of State and Head of Government are vested in two different offices (the Governor General who represents the Queen and the Prime Minister).

2. The Executive Branch (the Prime Minister and Cabinet) are all members of the Legislative Branch and are required to maintain the confidence of the House of Commons.

The main weaknesses of our system are:

Our Head of State is hereditary and our de facto Head of State is appointed. Notionally the Governor General is appointed by the Queen, but she acts on the advice of the Prime Minister - so essentially the PM appoints his boss. The problem is that any fix raises even bigger problems.

Our Senate is (as I have said previously) a festering pustule on the arse end of our democracy. It is long since overdue for abolition.

Our First Past the Post electoral system tends to create false majorities. The Chretien Liberals formed majority governments with as little as 38% of the vote against a divided right.

Good article Malcolm. These are the values of our leadership that will become us.