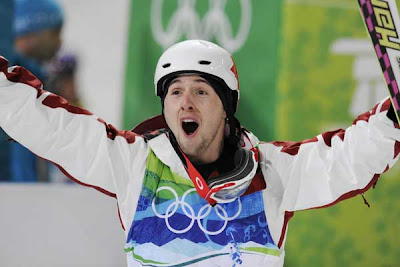 Alexandre Bilodeau made history this morning. He became the first Canadian in history to win an Olympic gold medal on Canadian soil.

We were, until today, the only Olympic host country ever to walk away without a gold won at home. Our drought lasted through the Montreal Olympics of 1976 and the Calgary Winter Olympics of 1988.

It seemed like our drought might never end when defending Women's Freestyle Moguls gold medal champion Jennifer Heil was narrowly edged back to a silver yesterday. (I met Jennifer Heil a couple of years ago and got to hold her gold medal from Turin. I may be one of a small handful of people in the world who has held both an Olympic gold medal and the medal of the Nobel Peace Prize.)

Alexandre Bilodeau was expected to finish no better than third. Instead, he became a Canadian hero.

To round this out, I offer two things.

Please go check out this humourous yet affectionate column about Canadians by American writer Rick Reilly of ESPN. Among my favourite bits:

These people are nice. Preposterously nice. Aunt Bee in mukluks nice. This is a country that has human-chomping grizzlies on every corner and yet chose the furry beaver for its national animal.

• Go to Tim's (short for "Tim Hortons") and have a double-double (two creams, two sugars) and some Timbits (donut holes) and stand around and talk about curling. This will be a welcome topic. The Canadians are still great at curling.
You: The boys oughta do priddy good, eh?
Him: Oh, sure. The sweeps are beauties.
You: You thinkin' they might be winnin' and whatnot, eh?
Him: Boy, would that ever be neat!

• If you're a snowboarder and you snap your neck in three places doing your Double Fakie Ollie Grab and they're putting you in the ambulance, smile and go, "It's fine! Canada's got free health care!"

And, finally, the song we were all waiting to hear at the Olympics.

Mairead Corrigan, one of the Northern Ireland Peace Women, who with Betty Williams, were awarded the Nobel in 1976. I attended a lecture she gave in New York in 1978.

Great post! Brought me joy! Welcome back to the real Malcolm. I was beginning to worry that you were becoming what you abhor.