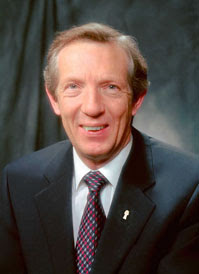 Just heard some appalling news directly from one of the people involved.

Federal Liberal leader Michael Ignatieff will be flying into Regina this morning to announce the appointment of former Saskatchewan NDP Premier Lorne Calvert as the Liberal Party candidate in the Palliser constituency. Calvert is originally from Moose Jaw, and had represented the city in the Saskatchewan Legislature in the days prior to becoming Premier. If successful, Calvert would be the third former NDP premier on Ignatieff's front bench, alongside former Ontario Premier Bob Rae and former BC Premier Ujjal Dossanjh.

This is a major blow to nominated NDP candidate Noah Evanchuk. The NDP had been targetted Palliser as one of their best chances in Saskatchewan, where the party of Tommy Douglas has been shut out for three straight elections.

From Regina, Ignatieff will proceed to Saskatoon to announce the appointment of former provincial NDP Minister Pat Atkinson as the Liberal candidate in Saskatoon - Rosetown - Biggar. Atkinson, who is still an NDP front bencher in the Saskatchewan Legislature has always been seen as a party stalwart, consistently hostile to overtures from the federal Liberals.

On this blog, there is little love for the Liberal Party in general, and even less for turncoats and quislings. Many will know that this blogger was very close to one of these individuals. The sense of betrayal is palpable. The Simple Massing Priest comes to this day with a wounded heart.
Posted by Malcolm+ at 12:40 AM

Well played. You had me there for a few minutes. I need to go to bed earlier.

And what about poor St. Andrew's? oh man. This is crappy news.

good April Fools to you too Malcolm :)

This has got to be an April Fool's joke. Calvert is NDP through and through