"Lord, first let me go and bury my father." 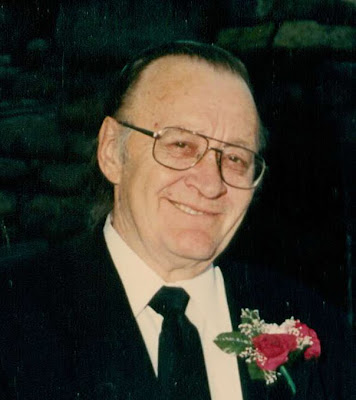 I had known the line was coming, but I still wasn't ready for it when it came.

As I read the Gospel lesson last week, the day after my father had died, I had to stop and regain my composure before telling the next line in the story.

[Jesus] said, "Follow me." But he said, "Lord, first let me go and bury my father." But Jesus said to him, "Let the dead bury their own dead; but as for you, go and proclaim the kingdom of God."

Tomorrow, I bury my father.

I have already committed him to the fire - an educational experience. My family connections to the funeral industry meant that I got a closer look than would have been the case for many, and my brother even pushed the button.

Tomorrow at 1:00, we will praise God, proclaim the resurrection and make our final goodbyes. For me, it is goodbye to a father who was completely absent for 20 years of my younger life, but my father nonetheless.

He was about 15 years a friend of Bill W. before our relationship was tentatively restored. Around the time of my ordination, he gave me a copy of Alcoholics Anonymous, thinking that, if nothing else, it would help me to minister to Bill's friends and pending friends.

The last 44 years of his life, whatever else they may have been, were better for the grace of a power greater than himself which restored him to sanity.


Glory to God,
whose power, working in us,
can do infinitely more
than we can ask or imagine.

Glory to God from generation to generation,
in the Church and in Christ Jesus,
for ever and ever. Amen.

I am so sorry, Malcolm. May he rest in peace and rise in glory. May Christ sustain you always.

Prayers for you Malcolm at this time and in the days to come. It is always hard no matter the relationship -

Saying prayers for you, my friend. And I'm glad your Dad made the acquaintance of Bill W.

Malcolm, I offer my prayers and my sympathy. The death of a family member with whom our relations have not always been smooth can be quite difficult. I know. May God give you comfort and peace.

Prayers for you and your family. Whatever relationship we had with our parents, this is is a very difficult time.