How would you say "Godwin" in Welsh? 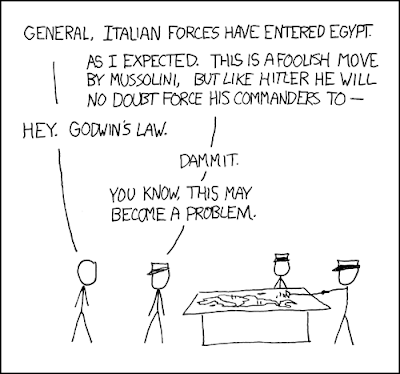 As an online discussion grows longer, the probability of a comparison involving Nazis or Hitler approaches one.

Meaning that, as an internet discussion goes on, eventually someone will - as night follows day - draw a comparison between the other person's position and the Nazis. It's also known as Reductio ad Hitleram.

In internet culture, it is a corollary of Godwin's Law that whoever uses the Nazi / fascist analysis first, automatically loses.

Of course, this is one of those "rules" that isn't really a rule. Sometimes people really are advocating fascism, and it is perfectly reasonable to call them on it.

But describing someone or something or some idea as "fascist" when it is manifestly not just makes the person drawing the comparison look silly. Or worse.

I mean, what sane human being takes Glenn Beck seriously?

The ill-considered use of fascist comparisons can have serious consequences. I have a friend who had to resign from a job and was essentially blacklisted because he had considered using a cartoon loosely comparing the opponent to the Nazis. (In fact, he had decided quite on his own that it was over the top, but the very fact of having considered the idea was enough. If only Glenn Beck et al could be held to account.)

In the past couple of weeks, a pair of British bishops have found themselves mired in the consequences of Godwin's Law.

John Broadhurst, Bishop of Fulham, was made a bishop to provide "sacramental assurance" to a certain segment of AngloCatholics that their priests (and therefore their sacraments) had not been infected with girl-cooties. As the Church of England slowly begins to drag itself into the 20th century (that is not a typo), Bishop Broadhurst has accused advocates of woman bishops of being fascists. Most people, quite rightly, have been treating Broadhurst like a bit of a joke.

Gregory Cameron, Bishop of St. Asaph in Wales apparently missed the nearly universal derision directed to Bishop Broadhurst. Cameron, one of the chief architects of the proposed Anglican Covenant accused Covenant-skeptics of being "Little Englanders" and compared them to the fascist British National Party. His letter to the Church Times - quite an extensive missive - buries his only substantial point underneath five or six paragraphs of namecalling.

Now, I understand that it may hurt one's feeling when other people pan your stuff. Heck, as a professional writer from time to time, I've seen my deathless prose butchered by any number of semi-literate hacks. One has to learn not to take it personally.

As to his one substantive point - that the Covenant explcitly says that it does not require "submission to any external ecclesiastical jurisdiction" - I've already dealt with that particular legal fiction here.

Ironically, Godwin would appear to be a name of Saxon origin. It seems odd that Godwin's Law should fall so close to a Scottish bishop of the Church in Wales. I wonder what's Welsh for "Godwin."

In the meantime, the Church Times Question of the Week is: "Should the Church of England reject the Anglican Covenant?" As I write, it stands results are: Yes 81% - No 18%. Presumably the other one percent are searching under their beds for Nazis.
Posted by Malcolm+ at 1:03 PM

For what it's worth, I have several times been called a Fascist at MadPriest's blog. It's not one sided, Malcolm.

You're absolutely right on that, Tim. And even those of us (I hope I can include myslef in that number) can occasionally be carried away by the passion we feel for the issue. (I rather suspect that's what happened wwith Bp Cameron.)

And, for what it's worth, I don't think you're even a bit of a fascist, Tim.