Why is the Archbishop afraid of an honest debate? 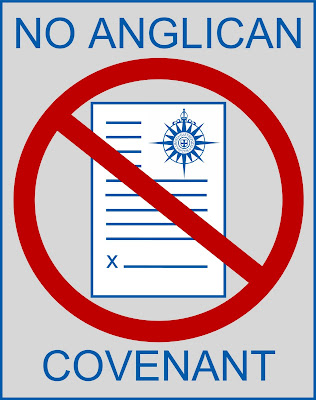 It's been a very busy day, and I haven't had the time to blog about the developments in the No Anglican Covenant Coalition's campaign.

We issued a release yesterday (warning - .pdf) emphasizing the importance of having a real debate about the proposed Anglican Covenant prior to today's vote at the Church of England General Synod.

It appears that the establishment do not agree. The Archbishop of Canterbury used his presidential address to the Synod to dismiss Covenant critics without answering a single one of the concerns that have been raised. He blithely repeated the meme that the Covenant has no impact on the autonomy of member churches, completely ignoring the concerns repeatedly raised about the "relational consequences" referred to in Section 4. (Terry Martin, who blogs at Father Jake Stops the World helpfully reproduces the list of "relational consequences" as described in the Lambeth Commentary on the Covenant (warning - .pdf) which include insignificant acts like suspending voting rights in the Communion, revoking membership in the Communion and demanding that other provinces individually suspend intercommunion with the blacklisted provinces. No, nothing punitive there.)

So, instead of making a compelling case FOR the Covenant, Dr. Williams has joined the former Secretary of the Covenant Design Group, the General Secretary of the Anglican Communion Office and the Communion's Director for Unity, Faith and Order in offering up insulting condescension. No compelling case for. No honest response to the legitimate concerns of a range of Anglicans. Simple dismissal.

I swear, I couldn't tell if I was listening to Rowan Williams or to Glenn Beck.

Of course, one can take some solace from the fact that the Communion establishment have come out with all guns blazing. We have forced them to abandon their original plan of sneaking this through quietly, and we have rendered them feart that we may actually have the capacity to hand them a serious setback.

Here's the thing. It seems to me that there are all sorts of decent and honourable people who support the Anglican Covenant because they honestly believe (whatever reservations they may have) that this is the best way forward. They aren't evil, nasty people. I just think they're wrong.

So let's have a debate.

Whoever has the rights of it, an open and honest debate is only a good thing.

I just don't understand why Rowan Williams and the people around him are so determined to avoid one.

O God of unchangeable power and eternal light,
look favourably on your whole Church,
that wonderful and sacred mystery.
By the effectual working of your providence,
carry out in tranquillity the plan of salvation.
Let the whole world see and know
that things which were cast down are being raised up,
and things which had grown old are being made new,
and that all things are being brought to their perfection
by him through whom all things were made,
your Son Jesus Christ our Lord;
who lives and reigns with you,
in the unity of the Holy Spirit,
one God, for ever and ever. Amen.
Posted by Malcolm+ at 12:19 AM

I believe that Rowan would not ever engage in disputation with the lowly likes of us, Malcolm. Nor would he deem our concerns worthy of a response. He stays on message.