To Brad Wall: The Court of Appeal was right, so stop being silly 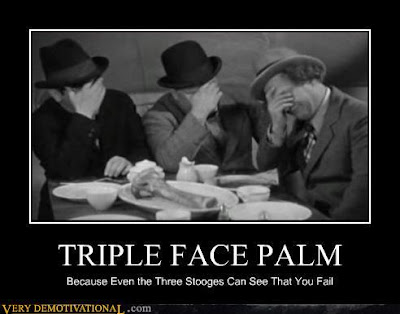 You'd think that would pretty much settle the matter, wouldn't you. Our provincial government had wasted $200,000 on a court reference that a brain-damaged chimpanzee could have told them would be rejected as unconstitutional.

But no. With Premier Brad off test-marketing himself for a chance to replace Prime Minister Harper at the head of the federal Conservatives, Justice Minister Don Morgan has been musing publicly about how the government might defy the courts and establish some back-alley workaround to allow these civil officials to refuse to do their jobs.

As I pointed out last May:

What we have here is a request that Orville Nichols should be allowed to keep a civil appointment even though he openly intends to use it to impose his religious views on citizens.

Would we be so understanding if a member of the Aryan Nations Church who happened to be a Marriage Commissioner refused to solemnize the marriage of a white man and a First Nations woman? I doubt it.

Would the Saskatchewan Party want to argue that the Canadian Forces should be required to accomodate the scruples of a pacifist? Or would they argue that perhaps a pacifist might consider a non-military career?

Would they want to force a meat processor to accomodate the scruples of a vegan who'd taken a job as a butcher? Or would they suggest that someone hired as a butcher should be prepared to cut meat or cut the strings?

Would we even be talking about this if it had been a Roman Catholic Marriage Commissioner who refused to solemnize the marriage of someone who was divorced? Not on your life.

The purpose of this entire legal circus is for the Saskatchewan Party to have a wedge issue that will play to a particularly rabid part of their base. There are a lot of people who don't care for equal marriage - and they mostly vote SaskParty.

Government services cannot be denied to citizens based on the religious prejudices of the public servant. Indeed, there is no provision in law to create such an exemption based on a public servants views on religion, race or politics. But Don Morgan proposes that one form of prejudice should be deliberately accommodated. As Madame Justice Gene Anne Smith put it for the minority:

Astonishingly, this clause would grant to a public official, charged with the delivery of a public service, an immunity to the anti-discrimination provisions of the [Saskatchewan Human Rights] Code not enjoyed by any other person in this province.

It is long past time for Premier Brad Wall to demonstrate some actual leadership instead of merely screen-testing for other job prospects. It is time that the boy-premier grew up and started trying to be the premier for all of Saskatchewan and not merely for the most backward, blinkered and bigotted subset of his base.
At the time, I felt the foolishness of the court reference deserved a double facepalm, since one facepalm was clearly insufficient. Don Morgan's determination to defy the Court of Appeal clearly requires something more.
Posted by Malcolm+ at 11:07 PM