With our small table now set up (thanks to some creative uses of discarded cardboard and the comshaw of a white table cloth), we now have a functioning base of operations in the exhibits area of General Convention.  Our Yes to Communion - No to Covenant pins are doing a brisk business and most of our interations with bishops and deputies have been positive and fruitful.

Along with my Episcopal Church Convenor colleague, Lionel Deimel, I attended a meeting of the legislative subcommittee charged with consolidating the assorted Covenant resolutions into more or less one votable resolution.  The current trend actually seems to be for two resolutions.  The first would affirm the Anglican Communion.  The second would offer a rather fudge-laden "maybe" on the Anglican Covenant.  There still seems to be much (perhaps deliberate) confusion that rejecting the Covenant would somehow set the Episcopal Church outside the Communion - despite the growing list of rejections to date (Philippines, England, Scotland) and the likely imminent rejection by Aotearoa, New Zealand and Polynesia.

Despite this, the few adamant Covenanters I've spoken to seem quite convinced their project is doomed.  (A certain pro-Covenant bishop asked that we not gloat too loudly when the time comes.  I will attempt to oblige.)

Tomorrow, an early meeting of the same subcommittee, followed by another day of staffing the booth.  In the evening, the World Mission Committee will hold hearings on the Anglican Covenant, which will be our best hope to shape whatever camel of a resolution eventually emerges from the committee.  We intend to press for a clear "no."  In due course, watch the Comprehensive Unity blog for an essay, Why Not "Maybe", which will be published in tomorrow's edition of Issues, which will be distributed tomorrow morning at General Convention. 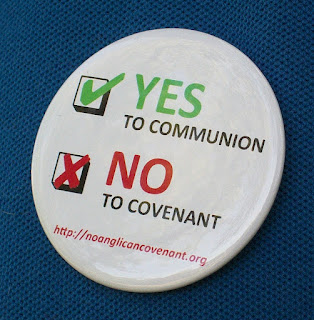 Happy to share The Episcopal Women's Caucus booth with you both. Livens things up a tad. Y'all are doing great work. Thank you.

Maybe is not acceptable. I am hoping you and Lionel can have patience and persistence in making the case that we have nothing to fear in rejecting a document that has been already dismissed by a majority in the CofE. If England (and Scotland and the Phillipines and the Maori) can't abide by it, that should tell us something. Prayers and continued thanks for your efforts there on the ground at 77GC.

Thanks, Malcolm. Sounds like Lionel and you are doing excellent work. My prayers are with you.

Keep talking, Malcolm. You guys are doing a great job there. If you get a chance to speak with Amy Haynie+ from FTW shake her hand. She is from my parish.

Loving the info on this web site, you have done great job on the blog posts.

Wow, what a vivid illustration of episcopal cowardice. In effect, "I know the project I am engaged in is vanity and a chasing after wind, and I have no intention of stopping what I'm doing, but please be nice when it finally flops."