And that's a wrap 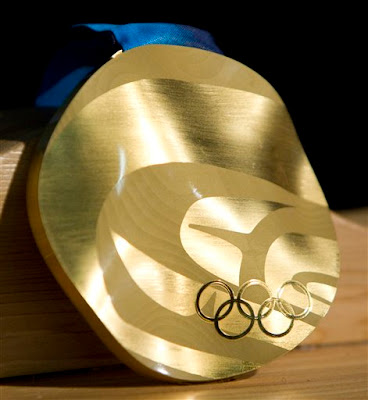 In the Olympic event that mattered most to Canadians, Canada took home the Gold in men's hockey with a heart-stopping, sudden death overtime win over the United States. Sid the Kid from Cole Harbour, Nova Scotia put the game away 7:40 into a 20 minute overtime period.

This was the best Olympic outing in Canadian history, with 26 medals (third overall). And, with 14, Canada surpasses the former record for Gold Medals previously held conjointly by the Soviet Union and Norway.

Perhaps, though, there is something quintessentially Canadian about our household. After the initial shouting and cheering, neither my beloved nor I could help but empathise with the crushing disappointment of the American team who, in about eight minutes of playing time, had gone from "about to lose" to "tied it up and gained the momentum" to "lost." It seems to us that, while a Silver in the individual events feels like you did very, very well, a Silver in the team events probably feels like 46 kinds of crap.

But the classiest moment of the post-game coverage, to my mind, was the CTV interview with US goalie Ryan Miller, who had been the key to American success throughout the games up to that point. See if you can find it (I'll look later). That young man is a class act.

And the most moving moment? Listening to our national anthem after the medal presentation. The music was instrumental, but you could hear every word distinctly as the crowd sang out our usually subdued pride. And then, part way through, the visual was no longer an ice rink in Vancouver, but a briefing room in Kandahar, where Canadian soldiers, sailors and air folk were on their feet singing through the tears of joy.

Now, off to evensong.

Is it inappropriate to ask for a solemn Te Deum in the evening?
Posted by Malcolm+ at 6:10 PM

The "moment" of the Olympics for me was 24 hours earlier, when midway through the final end of the Gold Medal Curling game, an impromptu version of Oh Canada broke out in the stands and swelled to proportions that the curlers had to pause for a moment. While at first, I joined in from my recliner, I too felt for the loud pants Norweigans, who still had a glimmer of a hope as Kevin Martin methodically ran them out of rocks. Having covered the 88 games in Calgary as a radio broadcaster, I can remember well, the incredible range of emotions the Olympics brings to all participants. And maybe it's a good thing that we Canadians are the ones who always feel for those whose dreams are, well maybe not lost, but pushed aside for a time

Not at all! At no less a paragon of liturgical rectitude than St Thomas's, Huron Street, here in Toronto, the Solemn Te Deum is sung at Evensong on special occasions such as Easter while the Oratorians have one before Midnight Mass on New Year's Eve.