Scandals - and how to make them worse 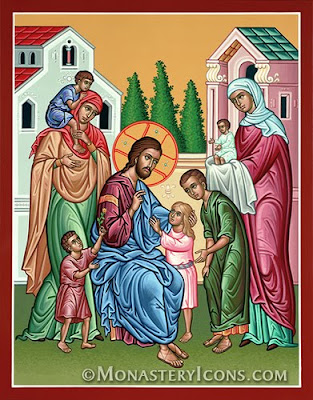 The gospels don't describe very many occasions where Jesus directly interacted with children. There is the episode, recounted in all the gospels, where Jesus tells the Twelve to let the children come to him. But perhaps the more startling is the episode in the synoptic gospels where Jesus warns of dire consequences for those who cause the little ones to stumble.
‘If any of you put a stumbling-block
before one of these little ones who believe in me,
it would be better for you
if a great millstone were fastened around your neck
and you were drowned in the depth of the sea.'
.
That's pretty serious.
.
In recent weeks (and on occasion over the last several years), one is moved to wonder what folk in the Vatican think about that passage.
.
Or if they think about it at all.
.
I have no interest in claiming that my church or any other is without sin in this regard. The residential schools issue is a blot on all the major churches that existed at the time. The best thing to be said for Anglicans in that regard is that our then-Primate, Michael Peers, was the first to offer an apology for the abuse experienced by far too many children in those schools - and did so in the face of significant criticism from the Anglican right.
.
But for our Roman Catholic brothers and sisters, the scandal isn't even any longer the thousands of cases of sexual abuse of children from around the globe. As scandalous as that is, I don't think most reasonable people blame entire institutions for the actions of individuals. And, despite the overheated rhetoric in some quarters, there is no particular evidence to support that Roman Catholic priests are more likely to be sexual abusers or paedophiles than any other professional / vocational demographic.
.
While each act of sexual abuse - which is always an abuse of power - is undeniably scandalous, it isn't the acts of sexual abuse themselves that are fuelling the rage that many reasonable feel towards the Roman heirarchy. It is the perception that the institution has protected abusers, covered up abuse, placed additional children at risk and left victims to bear the brunt of an institution's failings.
.
The evidence does seem to suggest that, at least some of the time, the Roman heirarchy has been guilty of precisely that. Some evidence does seem to suggest that Benedict XVI may be implicated in some of those cases; one from when he was Archbishop of Munich and others while he was head of the Holy Office. The evidence isn't quite as clear as some critics would suggest, but it does seem to call for a response.
.
To no small degree, public anger has been exacerbated by Rome's own stupidity and incompetence in dealing with the issue. The institutional stonewall, from a public relations perspective, is stupid enough. To start whinging that any criticism of the Pope or the Curia is rooted in anti-catholicc bigotry is utterly idiotic. To compare these criticisms to mid-20th-century anti-semitism is simply evil. (The Pope still has the authority to silence troblesome preachers. Benedict would be well-advised to silence Raniero Cantalamessa, an embarrassment to the entire Franciscan tradition. Someone so manifestly ignorant of the gospel should not be preaching it.)
.
David Clohessy, who speaks for an organization of those who have survived priestly abuse, pretty much nailed the odiousness of Cantalamessa's vile spew.
"It's heartbreaking to see yet another
smart, high-ranking Vatican official
making such callous remarks
that insult both abuse victims and Jewish people.
.
It's morally wrong to equate actual physical violence and hatred
against a large group of innocent people
with mere public scrutiny of a small group of complicit officials."
.
As a PR professional, I'd give Benedict the same advice I'd give any client caught in scandal.
.
1. Stop digging yourself deeper.
.
2. Come clean.
.
3. Admit your mistakes.
.
4. Apologize. To victims. Directly.
.
5. Commit yourself to addressing the problems - not only the abuse, but the institutional mishandling of both abusers and abused.
.
6. Follow through on that commitment.
.
Or, if I can sum it all up in one point:
.
1. Do the right thing, finally.
Posted by Malcolm+ at 12:31 AM

Gotta love the "Anglican Right" for contriving controversy where there is none. (I'm dying to know on what grounds they criticized apologizing to abuse victims, though it makes me feel marginally better about their obsession with my sex life).

Well said, spot on. I think your observations and advice is full of insight and wisdom and common sense

I wholeheartedly agree with most of what you say but I have one niggling question:
You talk of overheated rethoric and say that Roman Catholic priests are no more likely to be abusers than any other profession.

I find it profoundly shocking that priests of any colour are AS likely to be abusers than any other profession.

If you have potentially holy men entering the priesthood because of their love for God and a calling from God, and if, on average, they end up not one little bit more touched by the Spirit that the man or woman in the street - isn't there something deeply institutionally flawed?

Geoff, in fairness to the Anglican right, the complaint had more to do with the Primate weakening the Church's legal position by means of the apology. However, there were whispers in some quarters to the effect that some portion of the claims were questionable.

There was also, I think, a legitimate concern that the overall record of the residential schools was not entirely negative and that the Primate's apology seemed to some to overlook that.

Erika, in saying "no more likely" because the dominant rhetoric, at least in the secular world, seems to assume that Roman priests are far more likely to be paedophiles and / or abusers. In fact, there is no reliable evidence to assume that the proportion of abusers is higher, lower or the same. We just don't know.

That said, while I would HOPE that clergy would be less inclined to abusive acts, there is no evidence to support this either. Many clergy do seem to have sexual issues, which can lead equally to a moral absolutism or to sexual failings - and often both. In some ways, the "higher standard" which would intuitively be applicable may well make matters worse for some of those who struggle with these kinds of issues.

I agree that our expectations of higher standards are absolute nonsense and a huge burden.

But...there's this niggle....
and I think it has less to do with an expectation good behaviour from those I elevate to be a role model than with my understanding of the kind of person who is drawn to the religious life in the first place.

If you believe that benefit fraud is just one of those things you're entitled to, that it's ok to steal cosmetics from the chemist, that it’s ok to have several children with several women and not support any of them properly etc. you are much less likely to be drawn to a life where you are continuously being asked to evaluate the morals and ethics of everything you do, where you are drawn to a God in prayer who can help you to resist temptations, to understand yourself better and to grow.

And I don't really want to elevate sexual morals to a completely different kettle of fish, because people who simply struggle with sexuality issues could just as easily end up having "normal" affairs instead of deliberately abusing their power to exploit weak victims. There is a kind of “my power and my will first and never mind the rest of the world" that is precisely what I would expect to be far less prevalent in religious circles.

Unless I’m completely wrong with my premise that those drawn to the priesthood wish to lead a “good” life, it is difficult to understand why, on balance, so many of them appear to fail quite so spectacularly.

Certainly all those who take their Christian faith seriously should aspire (with God's help) to refrain from sinful acts. Those called to ordained ministry certainly no less than any other.

But I think you may have nailed it with the comment: "the average of those drawn to the priesthood is more likely to have different moral expectations of themselves than the average of society."

For some (for many?) it is this very desire to have a higher moral expectation of themselves which can be the root of the problem. In it's most extreme cases, it might include dealing with sexual needs, not by a relatively healthy sublimation, but by simple denial. Thus, instead of "letting the air out" in a healthy and controlled process, the pressure simply builds to an explosion.

(I realize that this analogy is fraught with any number of problems.)

So you'd say that of all moral failings, it's sexual ones and possibly addictions to food or alcohol are the ones priests most likely succumb to - that does make sense.

But why such abuse, why not simply clandestine affairs?

I don't know that those are the most likely for them to succumb too, but they are the ones most likely to result in a spectacular fall.

I think the "why not clandestine affairs" comes back to the issue of having an unhealthy application of high personal expectations. The more messed up the individual's understanding of sin, temptation and grace is, the more likely they are to hold off on "lesser sins" which would serve to (returning to the previous imperfect analogy) let off some of the pressure - until the pressure is too great and results in a completely out of control explosion.

Again I agree, again one niggle.... it is almost becoming axiomatic that sexual violence is about violence and aggression not about sex, which is why rape is used in war, for example, and why rape in marriage is a tool for control.

And some of the abuse we're now hearing about went on for years - not quite a one off uncontrolled explosion but rather a carefully set up system.

I'm not wanting to be deliberately contrary, but unless we truly understand what this whole abuse scandal is about we're unlikely to be able to find ways of putting it right.

If you look at it the other way round, perhaps those who are inclined to be abusers would choose professions where they have positions of power..