Quebec says no to bigotry

The election results are in and it wasn't particularly close. Having chosen the path of ethnic purity, the Parti Quebecois found it blocked by an electorate that didn't care for either the xenophobia of the so-called Charte des valeurs nor the economic uncertainty of the neverendum referendum. 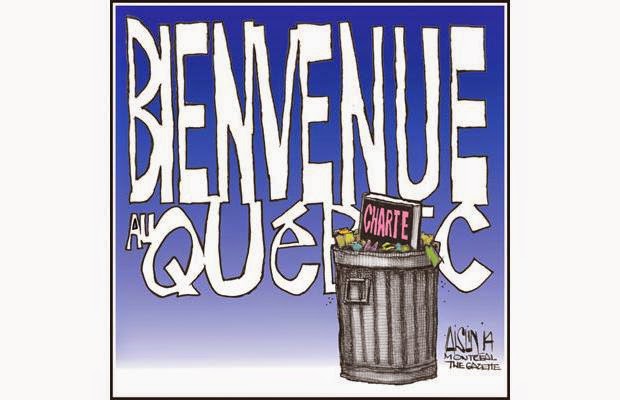 When all was said and done, the Liberals under Phillippe Couillard coasted to a majority with 70 of the 125 seats in the National Assembly. The PQ were reduced to 30 seats and their lowest popular vote since 1970, with Premier Pauline Marois going down to personal defeat in her own riding.

It is too soon to write the obituary for the sovereignist movement, but it may be on its way to palliative care. The decimation of the Bloc Quebecois in 2011 led many to conclude that a new generation of Quebecois - francophone, anglophone and allophone - were tired of having the province's politics driven by the so-called "National Question."

Mind you, the party driven from power this evening was hardly the tolerant, progressive party of René Lévesque. It's paranoid contempt for allophones and religious minorities bore more resemblance to Adrien Arcand than to the chain-smoking ex-journalist who first led them to power nearly 40 years ago. If the PQ can sideline their internal Tea Party faction of pur et dur hardliners, perhaps they can recover the kind of genteel civic nationalism that Levesque might even recognize.

In the meantime, the only disappointed federalists will be the Liberal apparatchiki who were hoping for another national unity crisis to exploit for partisan gain,

And now, for no particular reason, here are Quebec musical comedians Bowser and Blue singing about The Night They Invented Poutine.