The Goats Have Been Well and Truly Scaped

Apparently there would be no sectarian violence in Africa, if only North Americans would stop being nice to gay people. Indeed, Africa would become the very sine qua non of religious tolerance if it weren't for the gays.

At least that is the disingenuous position taken today by Archbishop of Canterbury Justin Welby. 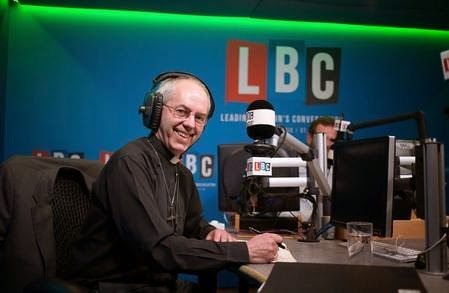 On a radio call in covering a range of topics, Welby was asked why clergy of the Church of England shouldn't be allowed to officiate at same sex marriages which are now legal in England and Wales. His response was either mind-boggling in its naïveté or soul-destroying in its pure evil.

According to The Guardian:

... Welby said he had stood by a mass grave in Nigeria of 330 Christians who had been massacred by neighbours who had justified the atrocity by saying: "If we leave a Christian community here we will all be made to become homosexual and so we will kill all the Christians."

"I have stood by gravesides in Africa of a group of Christians who had been attacked because of something that had happened in America. We have to listen to that. We have to be aware of the fact," Welby said. If the Church of England celebrated gay marriages, he added, "the impact of that on Christians far from here, in South Sudan, Pakistan, Nigeria and other places would be absolutely catastrophic. Everything we say here goes round the world."

One really doesn't know where to begin. One is mostly just shocked that a supposedly intelligent member of the English establishment could say something so manifestly idiotic.

Oh, I have no doubt that, at some point, some Muslim rabble rouser has used endemic cultural homophobia to incite listeners to violence. So have Christian rabble rousers. They may even have referred to the advance of LGBTQTS rights in the West.

But if it hadn't been homosexuals, it would have been something else. To the limited degree that bullies and terrorists need a reason to bully and terrorize, they can always find one. After all, violence between Christians and Muslims in most of Africa predates Gene Robinson's 2003 consecration by some decades.

It is interesting how this all manages to avoid the issue of Christian demagogues like former Nigerian Primate Peter Akinola or former Ugandan Primate Henry Orombi who have deliberately made life more dangerous and violent for LGBTQTS Africans, and have also been known to incite violence against Muslims.

Archbishop Welby reminds me of the people who tell victims of domestic violence that they must have done something to provoke their abuser. He is scapegoating, pure and simple. His comments are utterly disgusting and without any moral credibility.
Posted by Malcolm+ at 12:40 AM

Incompetence, thy name is "Lambeth Palace"!

Bless you for this analysis.

Nobody mentions the Martyrs of Uganda in this context. Their history explains a great deal of our current dilemma.

"manifestly idiotic" captures it - astonishing that such muddled logic, endangering many and betraying human rights of all, emanates from Lambeth. Tragically sad - for whom is this word from the Arch Bishop "Good News"?

I don't think the Ugandan Martyrs explain much here. This is all about Christian/Muslim sectarian strife, and LGBTs are only the most vulnerable scapegoat they can find.

One really doesn't know where to begin. One is mostly just shocked that a supposedly intelligent member of the English establishment could say something so manifestly idiotic.
Malcolm+

Exactly. He has gone way too far beyond reality (or touch with common sense). RESIGN, Justin Welby, RESIGN!

Christianity is the study of Jesus Christ. Over the centuries , men have changed the meanings of his message to meet their goals. To love others as yourself and forgive those who trespass against you are but a couple of ideas on how to morally live. To hate , kill, maim, those who are described by some church members as evil should never happen. Churches used to burn witches in Salem , Mass. One day they said the Governors wife was a witch and was going to burn her alive. The Governor put a stop to that nonsense. Now we need to put a stop to this nonsense !

The Queen, as head of Church, should remove him! You know, like Cramner.