After all, it wasn't the "profanity as art form" we expect from Peter Capaldi as Malcolm Tucker. (VERY strong language warning on the link.) It was a workaday profanity used in a workaday manner by a man for whom workaday is less an adjective than a notional construct. 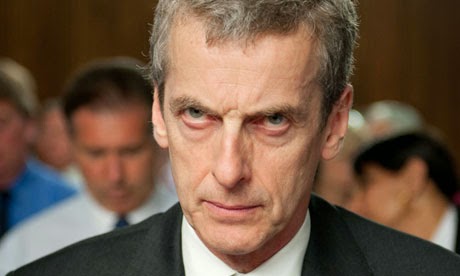 So instead of bothering t understand the middle class, one-percenter Trudeau and his one-percenter handlers have decided that the Dauphin should pretend to BE middle class by doing those things they dimly imagine the working class do.

I was in the Navy for 25 years. I know how to swear. I can make a celebrity chef blush, and I could give Malcolm Tucker a run for his money. Indeed, I have used the same profanity Trudeau used - and I have used it as a verb, a noun, an adverb and an adjective ... in the same sentence.  I think I've even used it as a preposition once or twice.

And anyone with even the faintest clue of what a middle class sensibility looks like would know that.
Posted by Malcolm+ at 11:33 PM

I'd love to think that implicit assessment is a misreading of the Canadian public, but I have my doubts. The graceless, limited vocabulary etc. are a pretty sizable constituency. I mean, of all things I hear Rob Ford has re-election prospects.

But even Rob Ford (who is no more middle class than the Dauphin) doesn't deliberately use that language as part of public speaking. Even his "pussy" comment, delivered in a pressured situation, is a circumlocution to avoid an overt profanity. Even the most foul-mouthed folk I know think there's a time and a place.